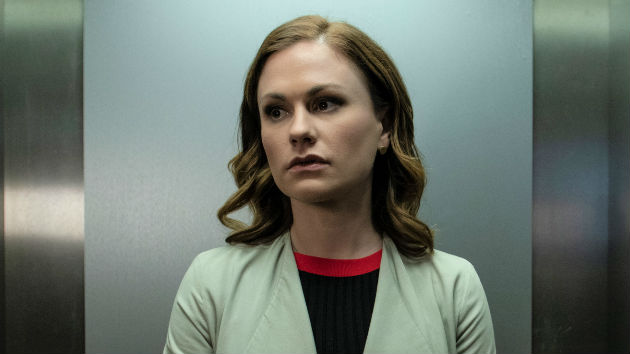 © 2019 Pop Media Group LLC. All rights reserved(NEW YORK) — On the new Pop TV series Flack, Anna Paquin plays Robyn, a publicist who cleans up high-profile messes but can't seem to clean up her own messy life.

Paquin, who also serves as a producer on the U.K.-set series, says her character's "amped-up" life mirrors the craziness of her chosen profession.

"As we all know, news cycles and the Internet happen instantaneously, so there's no time to sort of think of things too much or dwell on things too much, the actress tells ABC Radio. Decisions have to be made immediately, crises have to be averted five minutes ago.

"[Robyn] also runs on sort of a crazy clock herself, just as far as some of her… let's say, pastimes and less, uh, PG habits, Paquin continues. "So she's a pretty amped-up person, sort of, already."

Paquin says she she jumped at the chance to bring the story to the screen on a smaller network, where she could have creative freedom to bring this flawed character to life.

"I really like being involved from start to finish on something that I'm working on," she says. "At this point, if I care enough about something to want to be in it, I probably wanna be more involved on the production side."

Flack marks another new chapter for Paquin, who won the 1993 Best Supporting Actress Oscar at 11 years old for her role in The Piano. With the Oscars airing this Sunday, Paquin remembers her genuine reaction to winning at such a young age.

"A picture's worth a thousand words," she says. "So the absolutely shocked facial expression and speechless thing was pretty much…that's what was going through my head: nothing. Just like, 'oh wow.'"