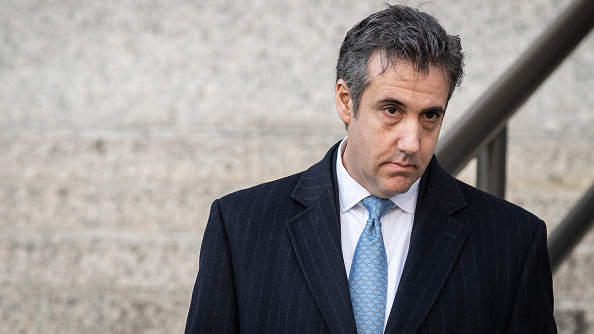 Drew Angerer/Getty Images(WASHINGTON) — Michael Cohen, former personal attorney and long-time fixer to President Donald Trump, appeared on Capitol Hill Thursday for closed-door meetings with the Senate Intelligence Committee, ahead of hearings before various congressional committees next week.
Cohen is scheduled to give public testimony before the House Oversight Committee on Wednesday and closed testimony before the House Intelligence Committee on Thursday. A source close to Cohen also confirmed he will testify behind closed doors to the Senate Intelligence Committee on Tuesday.
It was not immediately clear what Cohen discussed Thursday with the Senate Intelligence Committee members or its staff, but meetings like these are commonplace ahead of hearings. Cohen was accompanied by his legal counsel, Lanny Davis.
Cohen declined to comment to reporters, other than to say that the shoulder he recently had surgery on is still "sore."
When asked if Cohen will be coming back to be interviewed by the Senate Intelligence Committee on Tuesday, Davis said "I'm thinking about it."
That committee subpoenaed Cohen last year.
Cohen's testimony was delayed last month, "Due to ongoing threats against his family from President Trump and Mr. Giuliani," according to a statement from Davis, which included a reference to the president's personal attorney Rudy Giuliani.
But Cohen tweeted Wednesday his intention to testify, saying "The schedule has now been set. Looking forward to the #American people hearing my story in my voice!"
Wednesday's blockbuster public hearing comes at a sensitive time, as Trump will be in Vietnam on the same day meeting with North Korean leader Kim Jong Un. The testimony and potential for negative comments about Trump could distract from the second meeting with Kim.
"He needs to tell his personal story to the American people," Davis said in a wide-ranging interview for an episode of "The Investigation," a new ABC News podcast focused on the probe that is led by special counsel Robert Mueller.
"And when he does," Davis added, "you're going to hear personal, front-line experiences of memories, and incidents, and conduct, and comments that Donald Trump said over that 10-year time period behind closed doors that, to me when I first heard Michael tell me all this, even as much as I knew about Trump that was negative, was chilling."
Davis said that while Cohen cannot talk about subjects vital to the special counsel investigation, he can describe his life at Trump's side, where he spent years as a lawyer and fixer.
He said the issue Cohen "can speak to better than anyone" is Trump's character.
Cohen pleaded guilty in August to six felonies associated with his personal business dealings, including tax evasion and making false statements to a bank, and two felony campaign finance violations in connection with his role in arranging non-disclosure agreements during Trump's campaign with two women who had claimed past affairs with the president.
In November, he pleaded guilty to lying to Congress about a Moscow real estate project that Trump and his company pursued at the same time he was securing the GOP nomination in 2016. Cohen has on repeated occasions scheduled, and then canceled, appearances before Congress in recent weeks.
Due to the recent shoulder surgery, and the appearances before Congress, a judge recently pushed back Cohen's prison report date from March 6 to May 6.