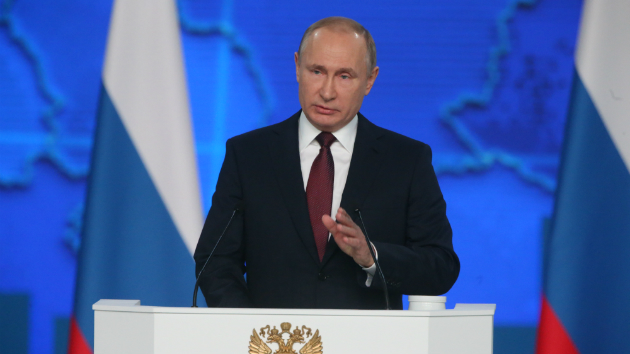 Mikhail Svetlov/Getty Images(MOSCOW) — Russian President Vladimir Putin gave his annual state of the union-style address on Wednesday, and, for the second year in a row, he used part of his speech to tout a new generation of nuclear weapons.
Among the weapons is a nuclear-capable underwater drone, which Putin said will take to the water this spring.
He said the weapons are only defensive and that Russia wants good relations with the United States. But he warned that if the U.S. deploys medium range missiles in Europe, Russia will be forced to deploy its own that could strike America quickly.
Putin also criticized the United States' withdrawal from a key nuclear arms treaty this month.
The speech, which mostly targets a domestic audience, also included promises of improved health care, tax benefits and other pledges to help ordinary Russians.
Copyright © 2019, ABC Radio. All rights reserved.