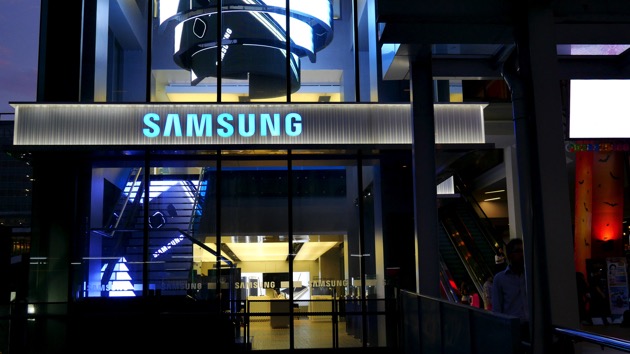 KreangchaiRungfamai/iStock(SAN FRANCISCO) — Samsung unveiled the Galaxy Fold, a smartphone that fits into your pocket but unfolds into the size of a tablet, at an event in San Francisco on Wednesday.
"We are fundamentally limited by the size of our devices, until now," Justin Denison, Samsung's senior vice president of marketing, told an audience of about 3,500 at the Bill Graham Civic Auditorium. "You get a powerful smartphone and a revolutionary tablet" in one device.
The phone will allow users to switch between screens and apps "with continuity" Denison added.
The Galaxy Fold will have two batteries and three-app multitasking. For instance, users will be able to use Google Maps, call a friend, and message someone on WhatsApp at the same time, Samsung exec Josh Kim told the crowd.
The device has a 4.6-inch display when folded as a phone and 7.3-inch display when unfolded as a tablet.
It will be available starting April 26, with prices starting at $1980, depending on region and carrier. There will be an LTE and 5G option.
Execs at the event heralded a new era in a challenged smartphone market that has seen lagging sales. Apple shocked investors last year with a warning that it would sell far fewer iPhones than expected, with the effects rippling into the supply chain for iPhone components and causing a dramatic fall in its stock price. The stock has since recovered some of its losses. This past week, the company reshuffled its executive suite, most notably its retail division.
Against this challenging backdrop, Samsung execs painted a picture of unlimited possibility for its product line, while acknowledging growing consumer ennui.
The Galaxy Fold "breaks new ground because it defies skeptics. The smartphone is a new technology in a saturated market. We are here to prove them wrong. We are here to mark a new beginning," DJ Koh, president and CEO of Samsung Electronics, told the crowd.
"For those who say everything possible has already been done, get ready for the dawn of a new era," Koh added.