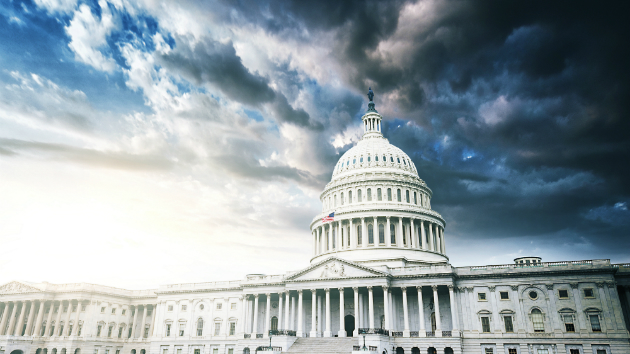 franckreporter/iStock(WASHINGTON) — House Speaker Nancy Pelosi has made no secret of her intentions — she wants Congress to wield just as much power as the president.
"You've heard me say over and over again, Article I, the legislative branch, the power of the purse, the power to declare war, many other powers listed in the Constitution, and, of course, the responsibility to have oversight," Pelosi said during a press conference last week.
One of those most responsible for insuring Congress is able to assert that power is the man she hired to serve as general counsel of the House of Representatives, Douglas Letter — a veteran Justice Department lawyer who has spent years helping presidents argue just the opposite.
"He has a very deep understanding of the executive branch and how the Department of Justice argues to defend those interests," said John Bies, who was a colleague of Letter’s during eight years at the Justice Department under former President Barack Obama. "His new role will require him to shift his perspective, but I think he’s very capable of doing that."
Most recently, that has put Letter in charge of mapping out plans for a potential lawsuit over the president’s controversial national emergency declaration to free up money to build a border wall, and grab for Congress’ most potent tool — the power of the purse.
But Congress and the White House could clash over an array of pivotal questions. Can Congress review copies of the president’s tax returns? Can they compel the attorney general to produce a copy of the special counsel report on meddling in the 2016 elections? Can they force the State Department interpreter who helped President Donald Trump converse with Russian President Vladimir Putin to tell them what was discussed?
"He knows very well what arguments to anticipate from the other side," Bies said, "and I think he knows the strengths and weaknesses of those arguments."
Letter has been described by former colleagues as adept at navigating and troubleshooting the thorniest legal challenges under the administrations of both parties during his time at Justice.
"In the recent history of the Department of Justice, a few career officials have served with such sustained distinction through both Republican and Democratic administrations that they came to embody the essence of the department as an institution to personify its finest traditions," said David Laufman, the former head of DOJ’s counterintelligence and export control section who overlapped with Letter at DOJ. "Doug Letter is in that elite company."
The position of chief counsel is a nonpartisan one, but partisan clashes are all but inevitable. On the first day of the new Congress, the speaker directed Letter to start defending the Affordable Care Act, something Republicans and the current administration have spent years trying to tear down.
Still, those who know the position, and Letter, said he’s capable of offering legal advice to both parties without favor.
"It’s a unique and fascinating role for a lawyer, because the general counsel serves at the pleasure of the speaker but is responsible for providing confidential legal advice and representation to members and staff on both sides of the aisle," said Thomas Hungar, the previous general counsel in the Republican controlled House.
The Office of General Counsel is typically composed of 10 staff members — attorneys, law clerks and administrative personnel, who represent the House of Representatives as an institution responsible for giving legal advice to leadership and staff on both sides of the aisle. In some ways, they assume the role of a managing partner of a law firm.
Letter, who did not respond to a request for an interview, said in December that he was looking forward to the experience.
"I am eager to apply my litigation experience as I take on the challenges and opportunities that come with the important position of House general counsel," he said in a prepared statement released by Pelosi’s office.
Democrats are already leaning on Letter as they begin to expand their oversight investigations.
House Intelligence Chairman Adam Schiff, D-Calif., said in an interview that he is working "very closely" with the counsel’s office as his committee begins its new investigation into the Trump administration. Schiff has said the committee's new probe will "go beyond" the question of Russian influence.
"We have encouraged the other committees to do the same, and that means everything from vetting language for subpoenas or strategizing about how to get information, what predicate is necessary," Schiff said. "They’re a full partner."
Democrats have consulted with Letter on the subject of how to best obtain information on the president’s meetings with Putin from the translator who accompanied Trump.
Both Schiff and Rep. Eliot Engel, D-N.Y., the chairman of the House Foreign Affairs Committee, have contemplated issuing a subpoena to the interpreter or to the State Department for any of her notes.
“That’s an issue I’ve discussed with the general counsel and my staff is also discussing within the office. It’s not one we’ve reached a resolution on but we’re going through the various legal issues and strategies,” Schiff told ABC News.
Letter will have to adjust to a more hurried time-table. Court challenges can sometimes take years, but Democratic lawmakers have acknowledged that they essentially have about a year to mount their collective fight ahead of a tumultuous 2020 presidential election.
Those who have worked with Letter say he is up to the task.
“Non-ideological, wise, diligent, brilliant, and deeply experienced — there is literally no one better suited to the job,” said Neal Katyal, a former acting solicitor general under President Barack Obama.
Copyright © 2019, ABC Radio. All rights reserved.