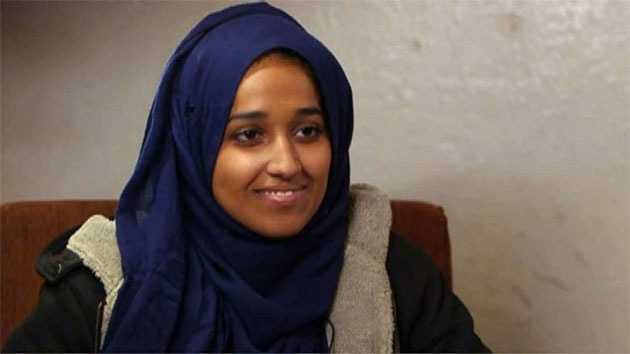 ABC News(WASHINGTON) — "ISIS bride" Hoda Muthana, who has been asking to return to the United States, is not an American citizen, Secretary of State Mike Pompeo said in a statement on Wednesday, contrary to her family lawyer's assertion.
Muthana is being held by U.S.-allied Syrian Democratic Forces (SDF) in eastern Syria as they regain the final territory from ISIS.
In her first television interview, the 24-year-old Alabama woman who spent four years as an "ISIS bride" told ABC News she felt shame hearing the tweets she posted when she was part of ISIS and wants to return to the U.S. with her 18-month-old son, who was born under the terror group.
But in a statement, Pompeo said she "is not a U.S. citizen and will not be admitted into the United States. She does not have any legal basis, no valid U.S. passport, no right to a passport, nor any visa to travel to the United States."
"The Trump administration continues its attempts to wrongfully strip citizens of their citizenship," Hassan Shibly, the Muthana family's attorney, told ABC News in a statement. "Hoda Muthana had a valid US passport and is a citizen. She was born in Hackensack, NJ in October 1994, months after her father stopped being [a] diplomat."
On Wednesday afternoon, Trump tweeted that the U.S. will not allow Muthana back into the country.
Shibly said Trump is trying to "play games" with American citizens.
"I think it’s preposterous, that the president called for Europe to take back its citizens and now is trying to play games when it comes to American citizens," he said.
Muthana was born to a Yemeni diplomat in New Jersey and moved to New York and then Washington, D.C., before finally settling with her family in Alabama as a seventh grader, she said.
While children born in America are granted citizenship under the 14th Amendment, children of foreign diplomats are not because they are not under the "jurisdiction of" the U.S., according to the U.S. Citizenship and Immigration Services. Still, children of diplomats can apply for residency and then eventually citizenship, per USCIS.
Muthana was seen in photos while under ISIS claiming to show her U.S. passport. Only U.S. citizens can obtain American passports.
She, her family and their lawyer maintain she is a U.S. citizen.
Muthana surrendered to Kurdish authorities within the SDF and is now one of 1,500 foreign women and children living in a Kurdish-run refugee camp in northern Syria.
When interviewed by ABC, she expressed remorse and regret about her social media posts inciting violence in the name of Islam and ISIS.
"I wish I could take it completely off the net, completely out of people's memory. … I regret it. … I hope America doesn't think I'm a threat to them and I hope they can accept me and I'm just a normal human being who's been manipulated once and hopefully never again," she said.
Muthana said U.S. consul officials had not been in contact with her yet. She said she cried herself to sleep, worrying that if and when she returns to the U.S., she will be sentenced to jail and separated from her son.
Shibly told ABC News the young mother was "brainwashed" by ISIS and now feels "tremendous remorse."