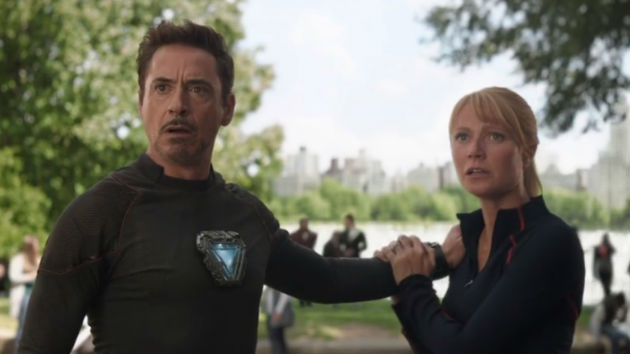 Marvel Studios(LOS ANGELES) — Virginia "Pepper" Potts will bid farewell to the Marvel Cinematic Universe following this spring's Avengers: Endgame, Gwyneth Paltrow tells Variety. However, Paltrow — who's played the personal assistant turned fiancée of Robert Downey Jr.'s Tony Stark/Iron Man for the last decade — left open the possibility of showing up in a cameo or appearing in flashbacks somewhere down the line.

"I feel very lucky that I did it, because I actually got talked into it," the Oscar winner tells the trade," noting her friend and eventual series co-star — and Iron Man director — Jon Favreau talked her into it. Indeed, the filmmakers had also eyed Rachel McAdams for the role — though she eventually joined the MCU as Dr. Christine Palmer in Doctor Strange.

"It was such a wonderful experience making the first Iron Man and then to watch how important it has become to fans," Paltrow said.

Incidentally, Paltrow's comments about the MCU were brief, but the 46-year-old might have confirmed a spoiler about Endgame. Explaining her MCU exit, Paltrow noted, "I mean, I'm a bit old to be in a suit and all that at this point." While Gwyneth wore Tony's Iron Man armor briefly in Iron Man 3, there's a chance "in a suit" refers to Rescue, an alter-ego she assumes in the comics after finding a suit of armor Stark designed for her — and that would confirm this on-set spy snap of her apparently wearing just that. Chances are, it's "all hands on deck" in the fight against Thanos in Endgame, and Pepper becoming Rescue would make sense.

Although she might be done as an MCU full-time player, she doesn't discount coming back for the occasional cameo, as she did in the final moments of Spider-Man: Homecoming. "I feel honored to be a part of something that people are so passionate about," she said. "Of course, if they said, 'Can you come back for a day?,' I will always be there if they need me."