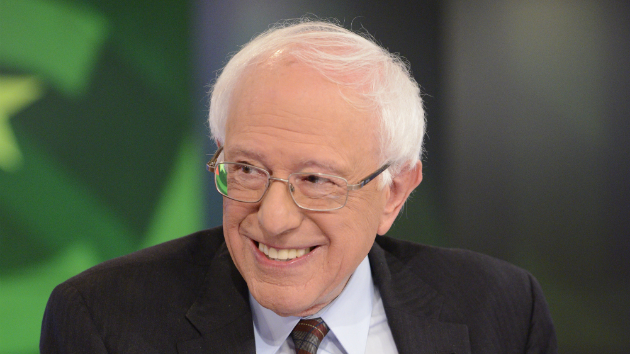 ABC/Lorenzo Bevilaqua(WASHINGTON) — Sen. Bernie Sanders touted an "unprecedented and historic grassroots campaign" in the launch of his presidential campaign. So far, so good.
Sanders' team announced just before 8 p.m. on Tuesday — about 12 hours into his official campaign — that over 330,000 people had donated a combined $4 million. The candidate's team also touted that the average donation was $27.
He put the full-court press on for donors throughout the first day of his campaign. He tweeted eight times asking for donations — seven times in English and once in Spanish — on Tuesday.
The senator blew past the early donation totals from the other candidates already involved in the 2020 race. California Sen. Kamala Harris, who announced her candidacy on ABC News' Good Morning America on Jan. 21, raised $1.5 million on her first day — a total her staff happily touted showed "numbers [that] reveal a campaign powered by the people."
At least a dozen Democrats have already announced they are mounting a challenge to President Donald Trump next year, including Harris and fellow Sens. Cory Booker, Amy Klobuchar, Kirsten Gillibrand and Elizabeth Warren; Pete Buttigieg, the mayor of South Bend, Indiana; former secretary of Housing and Urban Development under Barack Obama, Julian Castro; former Maryland Rep. John Delaney; and Hawaii Rep. Tulsi Gabbard.
Other blockbuster names who could enter the race include former Vice President Joe Biden and billionaire ex-New York City Mayor Mike Bloomberg.
Sanders, I-Vt., earned a reputation as a populist candidate running a similar campaign in 2016 to what he is likely to run this time. He touted "Medicare-for-all," free college education and a $15 minimum wage both three years ago and Tuesday in announcing his second presidential run.

He readily identifies as a Democratic socialist in an era when political candidates like Reps. Alexandria Ocasio-Cortez, D-N.Y., and Rashida Tlaib, D-Mich., have been elected on the same platform.
Hillary Clinton beat out the 77-year-old for the Democratic nomination in 2016 before she eventually lost to Trump. At 79, he would be the oldest president ever elected in November 2020.
Trump had kind words for Sanders at an announcement about the Space Force on Tuesday, saying, "I think he was taken advantage of. He ran great four years ago and he was not treated with respect by Clinton."
Sanders is dealing with different circumstances than 2016. He has been criticized over his 2016 campaign's handling of sexual harassment claims made by women against senior members of his staff.
He apologized for "inadequate" standards and 2016 campaign manager Jeff Weaver told ABC News on Tuesday that the candidate would "forcefully" address the issue in his new campaign.
Sanders served as a congressman from 1991 to 2006 and then as senator the past 13 years.
Copyright © 2019, ABC Radio. All rights reserved.