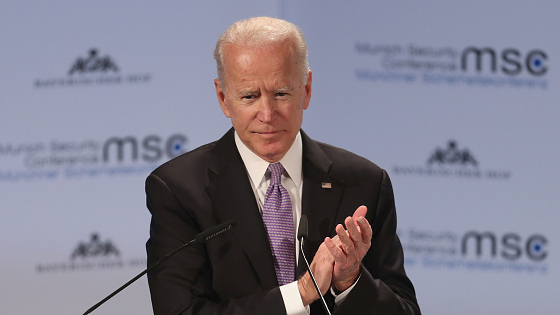 Alexandra Beier/Getty Images(NEW YORK) — Though former Vice President Joe Biden has said publicly he hasn’t made up his mind on pursuing a presidential run in 2020, sources close to the politician, who have spoken with him in private, say they believe he will mount a bid.
Robert Wolf, a top Democratic donor and former economic adviser to former President Barack Obama who has known Biden for over a decade, spoke with him last week and believes Biden is "90 percent there" on a run.
"It was clear that this was different than 2015," Wolf told ABC News. "This was someone who seemed ready to run and trying to figure out when best to announce.
"He feels he’s coming off an incredible midterm and he’s sitting in the best position to take on [President Donald] Trump across the country."
Biden also met with Sen. Diane Feinstein, D-Calif., last week. Her office confirmed to ABC News that Feinstein left the meeting with the sense that Biden would pursue a run.
However, when asked about his 2020 plans on Saturday during a discussion on election security at the Munich Security Conference, Biden demurred.
“I haven’t reached a decision. I am in that process of doing that, and I will in the near term let everyone know what that decision is,” Biden said.
As Biden contemplates his next steps, he has said he’s not in a rush to get in the race — despite nearly a dozen Democrats having already announced their candidacy.
“I think there is a sufficient amount of time to [decide], and I think that we have a tendency, particularly in the States, to start the whole election process much too early,” Biden said in Munich.
A spokesperson for the former vice president said Biden's comments on Sunday speak for themselves.
While Biden is taking his time to make the decision, some allies are waiting in the wings to join any potential campaign.
James Smith, who ran for governor of South Carolina in 2018, said he has been in touch with Biden's current staff and has discussed who might be valuable to a Biden run in South Carolina.
"We are all anticipating it is not 'if' but 'when' he announces," Smith told ABC News.
Biden supported Smith's 2018 run and in a video message during the South Carolina Democratic Convention weekend said Smith reminds him of his late son, Beau. While Smith is not working at the direction of Biden, he believes that the former vice president will run and is preparing for that.
"He hasn’t told me he plans to run, but we are preparing for what we believe to be a 'Joe Biden for President' campaign that will be robust here in South Carolina," Smith said.
After a quieter public schedule throughout December and early January, Biden’s appearances have begun to pick up.
Aside from his trip to the Munich Security Conference — of which he is a frequent attendee — Biden has three other public events on his schedule for February.
Biden will appear at the University of Pennsylvania Tuesday for a discussion of “global affairs and other topical subjects.” He will also hold a discussion with author Jon Meacham at the University of Delaware on Feb. 26, a rescheduled event from early December.
Biden is also scheduled to give remarks at the inaugural Chuck Hagel Forum in Global Leadership at the University of Nebraska Omaha on Feb. 28. The theme of the event: “The Role of U.S. Leadership in a Changing World."