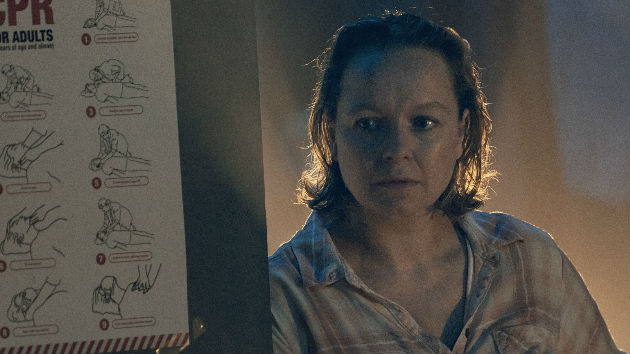 AMC/Gene Page(NEW YORK) — (SPOILERS AHEAD) Sunday's episode of The Walking Dead kicked off with a flashback to 23 days since the walker outbreak began. A father, mother, and their little girl are hunkered down in a basement with some others while emergency broadcasts blare and hell breaks out outdoors.
Back in the present, we learn the little girl grew up to be Lydia, the Whisperer whom Daryl locked up. She and Henry keep chatting while Daryl eavesdrops from outside. Lydia makes plain that her mom, one of the Whisperers, is someone you don't mess with.
Meanwhile, Tara and some of the Hilltoppers search for Luke and Alden, who were taken by Whisperers. Along the way, they come upon a band of walkers, and after confirming they're actually the undead and not humans in disguise, Tara tells the group to fall back to Hilltop for safety.
In the prison, Henry keeps chatting with Lydia, until he breaches security by talking about the Kingdom. Daryl bursts in and marches him out, revealing that he and the others have been using him to get info from her. Eventually, Daryl comes into the cell and questions her about her mom.
In the flashback, we see one of the survivors panic and try to escape their shelter. Lydia's mom tries to quiet him down, and eventually breaks his neck to protect the survivors. In a role reversal, her shocked dad tries to comfort the little girl.
In the cell, Lydia has been recounting that story to Daryl: "Your mom did what she had to." He offers her medicine for an ear infection and some water, and she promptly tries to grab him through the bars instead. He notices her forearms are scarred from abuse. Daryl tries to bond with Lydia over their shared experience of being victims of parental abuse. "What my mom does she does for a reason," she says of her scars. "When you stay soft, people die."
She flashes back again, and we see her mom, her hair now cut short, as the survivors decide they need to dispose of the guy she killed. Little Lydia wakes up, and so does the dead guy. She screams and her dad tries to protect her. Instead, he got bit. In the present, she resents her loving dad for being soft.
Back at Hilltop, Yumiko and the other newcomers vote to sneak out to find their comrade Luke.The newbie Hilltoppers sneak out on their rescue mission.
Henry lets Lydia out of her cell so she can see Hilltop is "a good place with good people." She eventually freaks out, thinking about what she's been through, and asks to get put back.
The next morning, Lydia is presented with food and asks for the medicine she previously turned down. She explains how her clan works, and that her mom wouldn't come looking for her. She also admits that her mom lied about their family. Her mom had programmed in her for years that it was the little girl's fault her dad was bitten and killed. In fact, he wasn't bit at all, her mom killed him when he refused to join her in fleeing that basement.
"Some people ain't meant to be parents," Daryl later tells Henry, who's surprised Daryl offers to let her stay.
Back at Hilltop, the newbies try sneaking back in, but Tara lets Yumiko know she was well aware her group tried to sneak off. Just then, a group of Whisperers approach Hilltop. A bald woman walks through them.
"I am Alpha," she says. "And we only want one thing from you: my daughter." It's Lydia's mom.
The Walking Dead returns Sunday, February 24 on AMC.