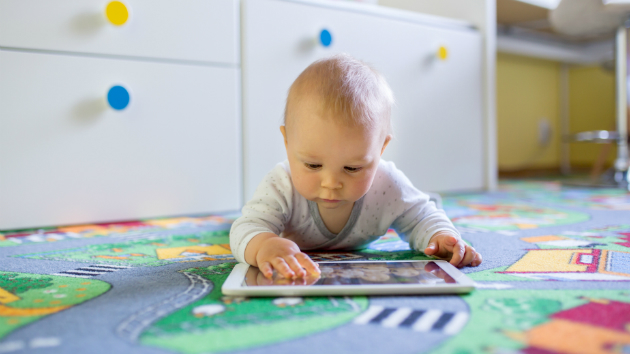 tatyana_tomsickova/iStock(NEW YORK) — A new study found that the amount of time children ages 2 years old and younger spend on screens has more than doubled since the mid-90s.
The study, published Monday in JAMA Pediatrics, was based on parent diary data, aggregating the reported screen time of children under age 2 from 1997 to 2014.
In 1997, this age group spent approximately 1.32 hours a day on a screen, while in 2014, they spent 3.05 hours per day on a screen, according to the results, with most of that screen time spent watching TV.
While the long-term consequences of excessive screen time for babies and toddlers' developing brains remains unknown, the American Academy of Pediatrics currently recommends no screen time for babies under age 2 and only one hour a day maximum for children aged 2 through 5.
The young brain rapidly changes in both its structure and function, according to ABC News' chief medical correspondent Dr. Jennifer Ashton, and because it remains unknown whether excessive screen time produces any long-term meaningful effects, the study's findings may spark concern for some parents.
Ashton adds, however, that not all screen time is the same and there are plenty of educational programs that shouldn't be lumped into the same group as other forms screen time.
Below, Ashton shares some tips for how parents with small children can keep track of or replace excessive screen time:
1. Keep track of time: Monitor how much time your child spends in front of a screen and set limits if it's something you are concerned about.
2. Make screen time interactive: Download educational games, apps or programs as opposed to or in addition to simply putting on a movie or TV show.
3. Remember 'Old-fashioned' toys and games: Swap out the iPad or television for Legos or other toys without a screen.
4. Don't replace the face: Don't forget to spend time interacting face-to-face with developing children.