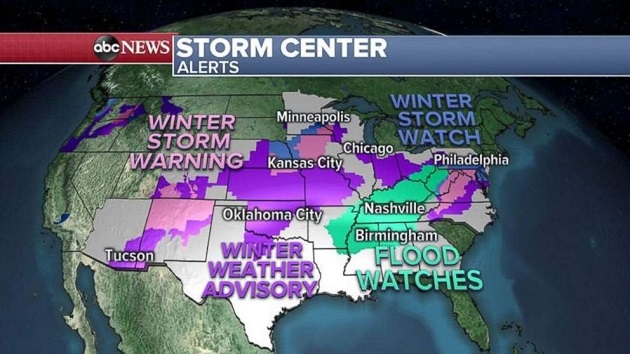 ABC News(NEW YORK) — Two storms are forecast to combine east of the Rockies Tuesday, creating a major mess of snow, ice and heavy rain.
Alerts have been issued Tuesday morning for 28 states from Arizona to New Jersey.
A storm system in the western Gulf of Mexico is gaining strength Tuesday morning and already spreading rain from Houston to New Orleans.
Meanwhile, a separate storm system is moving out of the Rockies, delivering snow from Tucson, Arizona, to Denver.
By Tuesday night, as the storms merge, heavy snow and ice likely will break out in the southern Plains, from northern Texas into Oklahoma and Kansas. Around the same time, heavy rain will be spreading throughout the Tennessee River Valley and most of the South.
Tuesday night into Wednesday morning, snow will begin in Chicago, Minneapolis and Detroit as it approaches Washington. Heavy rain is forecast in the Ohio River Valley.
The storms should be fully merged by Wednesday afternoon after combining over a cold front and moving into the Northeast, which will see snow, ice and rain from Washington to Boston. New York City, Philadelphia and Boston all should briefly see snow, then ice, then rain. Not much snow accumulation is expected there.
Washington, D.C., could see 4 to 6 inches of snow, while Philadelphia, New York and Boston may get just 1 to 2 inches.
In the Midwest and the Plains, Oklahoma City is expected to get icy conditions, Kansas City could get 1 to 3 inches of snow, and both Des Moines, Iowa, and Minneapolis could see 4 to 6 inches of snow.
Half a foot of rain in parts of the South, from Memphis, Tennessee to Atlanta, could lead to flooding.
Copyright © 2019, ABC Radio. All rights reserved.

Active storm pattern with cross country storms bringing heavy snow, damaging winds, flooding rain
Stormy weather pattern on the way for the West and the South
Spring-like weather across much of US, possible heavy snow in Rockies and parts of West
Woman trapped for 10 hours under collapsed backyard awning in frigid weather lucky to be alive
Biden’s first 100 days live updates: Biden to visit Texas after deadly storms
Spring-like weather from Denver to NYC as strong storm hits West with snow