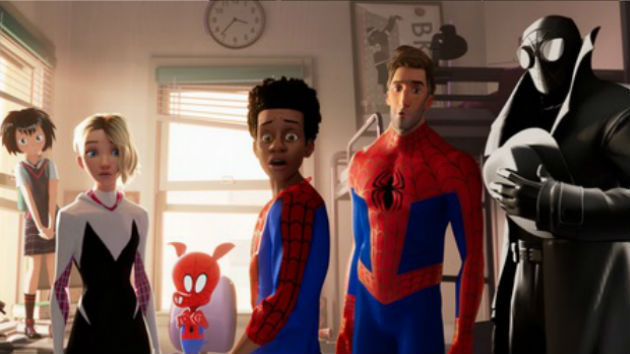 Sony Pictures Animation © 2018 CTMG, Inc. All Rights Reserved. (LOS ANGELES) — Sony Pictures Home Entertainment is pulling out all the stops for its Oscar-nominated animated film Spider-Man: Into the Spider-Verse. The film will be released on digital Tuesday, February 26 and on 4K, Blu-ray and DVD on 3/19.

The movie, which features the voices of Nicolas Cage, Lily Tomlin, Mahershala Ali, Shameik Moore, Jake Johnson, Hailee Steinfeld, and Zoe Kravitz, has made more than $355 million worldwide, and is in the running for Best Animated Feature Film at this weekend's Oscars.

The movie centers on a device that tears the fabric of reality and unites different versions of the web-slinging hero from various dimensions in the Brooklyn, New York home of a young Spider-Man named Miles Morales.

The company has also announced that the film will come packaged with a host of special features, including a showcase of the movie's diverse characters; a look into the film's unique visual style; a tribute to Spider-Man's co-creators, the late Stan Lee and Steve Ditko; character design breakdowns, and more.

In addition, the release features an all-new original short Spider-Ham: Caught In a Ham, centering on a pig version of Spidey who was voiced by comic John Mulaney.

There are also a pair of lyric music videos for two songs from the soundtrack: "Sunflower" by Post Malone and Swae Lee and "Familia" by Nicki Minaj & Anuel AA (feat. Bantu).