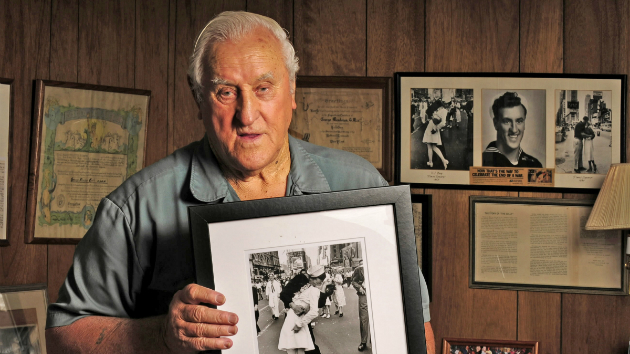 Patrick Raycraft/Hartford Courant/MCT via Getty Images(PROVIDENCE, R.I.) — Just about everyone's seen the photo. Taken in Times Square on Aug. 14, 1945 — Victory in Japan Day — the black-and-while image shows a sailor in a dark uniform and white cap delivering a passionate, celebratory kiss to a woman in a nurse's uniform, holding her in his arms as he dips her backward.
The image came to be known as "The Kiss." Taken by famed photographer Alfred Eisenstaedt, it was first published in LIFE magazine and has been reproduced countless times since.

But because it doesn't show the faces of the sailor or nurse, it took over half a century — and more than a few false claims — before the couple's identities were confirmed. She was Greta Zimmer Friedman, then a dental assistant. And he was George Mendonsa.
Neither of them had met before the kiss — which Mendonsa initiated — and they went their separate ways after, leaving behind that single, spontaneous moment of joyful celebration of the end of World War II.
Friedman passed away in 2016 in Richmond, Virginia at age 92. And according to Rhode Island's Providence Journal, Mendonsa died last Sunday at an assisted living facility in Middletown, where he lived with his wife of 70 years.