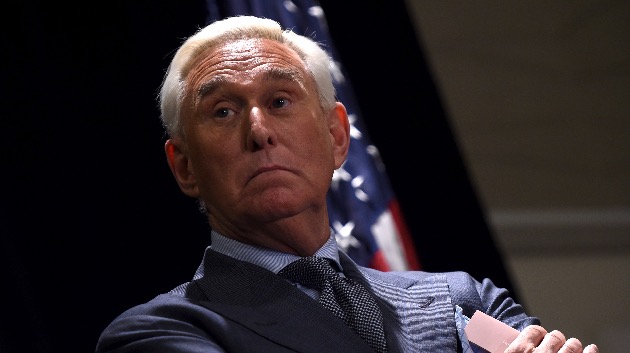 ANDREW CABALLERO-REYNOLDS/AFP/Getty Images(WASHINGTON) — A federal judge on Tuesday ordered political operative and former adviser to Donald Trump, Roger Stone, to explain his since-deleted Instagram post on Monday in which he slammed the judge and later issued an apology to her.
Judge Amy Berman Jackson issued an order for Stone to return to U.S. District Court in Washington, D.C., on Thursday for a show cause hearing to explain why the conditions of his release and limited gag order "should not be modified or revoked in light of the posts on his Instagram account."
"Through legal trickery Deep State hitman Robert Mueller has guaranteed that my upcoming show trial is before Judge Amy Berman Jackson, an Obama appointed Judge who dismissed the Benghazi charges again Hillary Clinton and incarcerated Paul Manafort prior to his conviction for any crime," Stone wrote in a caption to the post, which featured a picture of Judge Jackson with a what appeared to be a crosshairs in the upper corner.
Stone completed the caption the request, "Help me fight for my life" and a link to his legal defense fund.
In a statement to ABC News on Monday before Jackson's order, Stone wrote, "A photo of Judge Jackson posted on my Instagram has been misinterpreted. This was a random photo taken from the Internet. Any inference that this was meant to somehow disrespect the Court is categorically false. What some say are crosshairs are in fact the logo of the organization that originally posted it something called corruption central. They use the logo in many photos."
Reached by ABC News Tuesday following Judge Jackson's order, Stone said, "I will be present for the hearing as ordered."