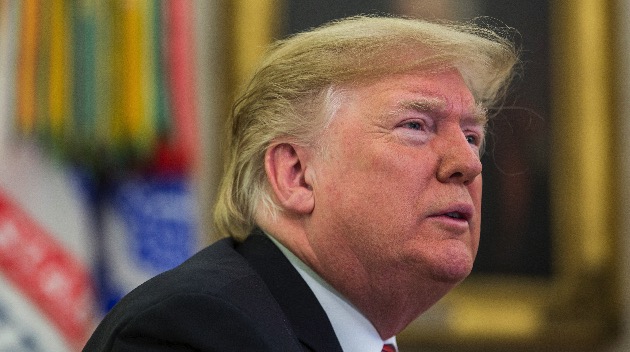 Zach Gibson-Pool/Getty Images(WASHINGTON) — President Donald Trump is set to sign a new directive Tuesday aimed at formally establishing a new space-focused military branch that will begin as an extension of the U.S. Air Force, yet another step toward making the “Space Force” a reality.
Trump, on the campaign trail and elsewhere, had originally touted that the Space Force would work as its own branch on par with the status of the Air Force, Army and Navy, promising "American dominance in space."
But the ‘Space Policy Directive 4’ has been scaled back from that and puts it more in line with the status of the Marine Corps under the Navy – a route seen as more palatable to skeptics in Congress.
“We haven’t abandoned that goal, and I think we’re achieving what is the president’s number one objective which is a separate armed service,” a senior administration official told reporters on a conference call outlining the legislative proposal Tuesday.
It’s a “step toward a future military department for space,” the official added.
As ABC News has previously reported, the official confirmed to reporters that the Space Force will be headed up by a 4-star general who will serve as chief of staff and will join the ranks of the Joint Chiefs of Staff.
The president would also nominate a civilian under secretary beneath the Air Force to be approved by Congress.
Late last year, Trump signed a memorandum establishing the Space Command, the military’s 11th unified combatant command — which centralizes DoD’s warfighting operations in space. In contrast, the Space Force will likely focus on the recruiting, training and equipping of service members for the space mission, along with acquisition.
Tuesday’s directive tasks the Secretary of Defense with drawing up the official budget request for the president’s FY2020 budget, and the official said that they expect the start-up cost won’t exceed $100 million.
Last year then-Deputy Secretary of Defense Pat Shanahan, who now serves as acting Defense Secretary, put the total cost at less than $5 billion.
An official said Tuesday the figures are still tracking to the “low billions.” ‘Space Policy Directive 4’ will also ask the Defense Secretary and Director of National Intelligence to compile a joint report for President Trump within the next 180 days that outlines progress towards creating the Space Force as well as “a path forward.”
The defense secretary will additionally be responsible with determining the “appropriate time” for recommending that the president propose legislation advancing the Space Force into a separate military department.