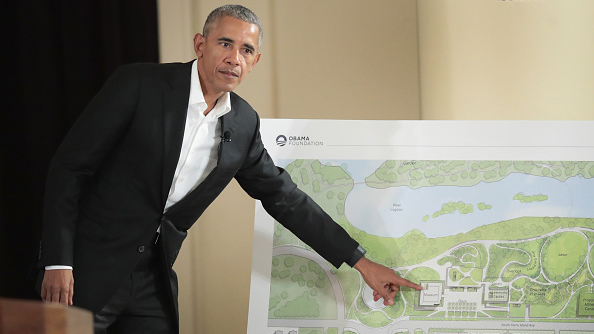 Scott Olson/Getty Images(CHICAGO) — Construction of the $500 million Barack Obama Presidential Center in a historic Chicago park was dealt a major setback on Tuesday when a federal judge ruled that a lawsuit filed by park advocates to stop the project can move forward.
U.S. District Court Judge Robert Blakey rejected a request by the city of Chicago to toss the lawsuit filed by the group Protect Our Parks.
In its lawsuit, Protect Our Parks claimed the city and the Chicago Park District violated statutes dating back to the 1800s that bar private development in public parks along Lake Michigan.
Blakey, who was nominated to the federal court by Obama in 2014, heard arguments in the case last week. Blakey ruled that Protect Our Parks has standing to sue because it represents taxpayers who are concerned that providing park land in the public trust to the Obama Presidential Center violates their due-process rights.
The judge dismissed a claim that the center violates the First Amendment right of taxpayers who disagree with Obama's "political, environmental, or educational initiatives" yet will be forced to pay a new real estate tax to support the center.
The judge warned both sides that he does not want to see the litigation dragged out and that he wants a trial to begin in 45 days.
The private nonprofit Obama Foundation, based in Washington, D.C., had hoped to break ground on the project this year.
The Obama Presidential Center is slated to be built on 20 acres inside historic Jackson Park on the South Side of Chicago near an economically depressed area of the city where the 44th president of the United States got his start as a community organizer.
"The Obama Presidential Center is a once-in-a-lifetime opportunity for all of Chicago. It will bring transformative investment to the South Side, create hundreds of permanent jobs, and inspire young Chicagoans and people from across the world to follow the lead of Barack and Michelle Obama," Ed Siskel, corporation counsel for the city of Chicago, said in a statement following Blakey's ruling.
"We are pleased that the court dismissed some of the claims and made clear that the proceedings will move forward expeditiously," Siskel said.
In a statement to ABC News, a spokesperson for the Obama Foundation said, "As we have said before, we believe the lawsuit is without merit."
"We are confident that our plan for the Obama Presidential Center is consistent with Chicago's right tradition of locating world-class museums in its parks, and we look forward to developing a lasting cultural institution on the South Side," the spokesperson said.
The legal battle comes less than three years after a similar lawsuit filed by the group Friends of the Parks prompted "Star Wars" creator George Lucas to abandoned plans to build a museum to house his art collection on land along Lake Michigan owned by the city of Chicago Park District. Lucas decided to build the museum in Los Angeles.
The Protect Our Parks lawsuit accuses city officials of deceiving the public with a "short con shell game" to "legitimize an illegal land grab."
The Chicago Park District sold the land to the city for $1 and city officials got the state legislature to amend the Illinois Aquarium and Museum Act to include presidential libraries as an exception to the no-development rules.
But the Protect Our Parks lawsuit contends the center does not meet the definition of a presidential library because it will not house documents, records and artifacts from the Obama administration as the city initially said it would.
"The Obamas announced that, instead, the [Obama] Foundation had decided to forego and relinquish all custody and control of the former president’s records to NARA [National Archives and Records Administration] and abandoned all plans for building a 'Presidential Library,'" according to the lawsuit.
Under the agreement the Chicago City Council approved, the Obama Foundation would pay the city $10 to use the land in Jackson Park for 99 years.
"The new, renamed 'Presidential Center' would instead be privately owned, managed and operated in ways that the private Foundation itself would decide," reads the suit.
The suit charges the city pulled a "bait and switch" on the public.
The city countered that the state's Park District Aquarium and Museum Act authorizes it to build and operate museums, including presidential centers, on public park land.
"The Museum Act expressly affirms that presidential centers, along with the other museums authorized by the statute," the city's response to the lawsuit reads.
The city's response notes that the Obama Presidential Center would be the 12th museum in Chicago located in a public park.