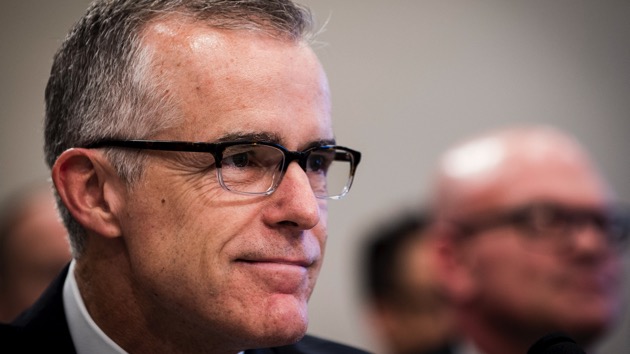 Pete Marovich/Getty Images(NEW YORK) — The former deputy director of the FBI, Andrew McCabe, said Tuesday that he “absolutely” will trust the conclusions ultimately reached by special counsel Robert Mueller, even if that means Mueller determines President Donald Trump hasn’t coordinated his actions with the Russian government.
“I have total confidence in Director Mueller, and the team he’s put together,” McCabe said on ABC’s The View Tuesday. “I will have complete faith in the conclusions that they draw.”
Nevertheless, McCabe told the show’s hosts he had serious concerns that Trump “may be a threat to national security.”
Asked specifically by host Joy Behar whether he believed Trump had been acting as an agent of the Russian government during the 2016 presidential campaign or shortly after taking office, McCabe said, “We believed that could be possible, and that’s why we opened those cases.”
McCabe was referring to two cases he opened in the days after James Comey was fired as FBI director in May 2017: an investigation into whether Trump was coordinating with Russian operatives, and an investigation into whether Trump was trying to obstruct the FBI’s larger probe into Russia’s meddling in the 2016 presidential election.
On “The View,” McCabe reiterated previous concerns about Comey’s firing, Trump’s public attacks on the investigation, and Trump’s alleged request of Comey that the FBI back off of its scrutiny of national security adviser Mike Flynn, who lied about his contacts with the Russian government.
The president “fired the director when [Comey] didn’t do the things that the president asked,” and that became “an important part” of the subsequent investigation launched by McCabe, the former deputy director said.
Just minutes before McCabe appeared on the show Tuesday, Trump took to Twitter to attack McCabe as a liar motivated by politics. Trump echoed sentiments from the day before, when the president similarly dismissed McCabe's allegations as a bunch of "lies" coming from a "disgraced" official who was fired from the FBI last year for allegedly misleading internal investigators about a leak to the media.
Asked Tuesday whether he has ever “leaked” to the media, McCabe insisted he has not, but he did not say whether he’s ever shared investigative information with the media.
He said that, as deputy director, he was “one of two people at the FBI who had the authority to disclose information to the media,” and that authority is “baked in” to FBI guidelines.
Nevertheless, federal prosecutors are currently weighing whether to bring charges against McCabe for his alleged falsehoods to investigators looking into how information related to a probe of the Clinton Foundation was shared with a reporter.
As for the investigations he opened against Trump, McCabe on Tuesday said he talked with Rosenstein and senior FBI officials about it at the time, and key lawmakers on both sides of the aisle were also informed about the new probes.
McCabe recounted how, during separate meetings in the days after Comey was fired, Deputy Attorney General Rod Rosenstein raised the possibility of wearing a wire into the White House to secretly record the president, and questioned whether the 25th Amendment might be used to oust Trump from office.
“We did not follow up on” either matter, McCabe said. “It never went beyond the realm of a brief off-handed comment.”
As the public waits for Mueller to wrap up his investigation, McCabe said he believes Mueller’s findings should be shared publicly “in the broadest way possible.”

McCabe’s interview with The View was part of a weeks-long media tour for him as he promotes his new book, The Threat: How the FBI Protects America in the Age of Terror and Trump.