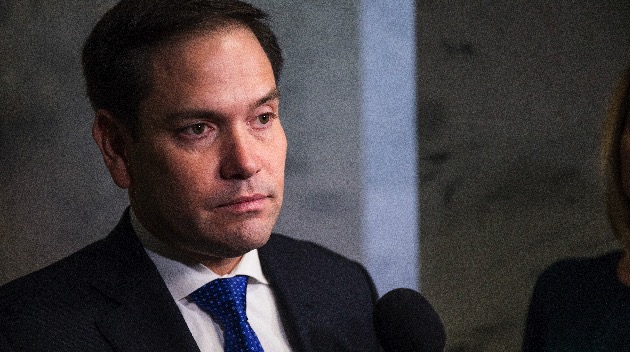 Zach Gibson/Getty Images(CUCUTA, Colombia) — U.S. Sen. Marco Rubio, R-Fla., made a surprise visit to Cucuta, Colombia, a town along the Venezuelan border on Sunday, visiting centers where the humanitarian aid is being stored. The senator also sent a message to Venezuela's military, which has so far stood by embattled president Nicolas Maduro and has blocked aid from entering the country.
"Sometimes the time comes when we have to make a decision, a decision that will define the rest of our lives," Rubio said. "I believe that time has come for many military and police and national guard members."
"Will you prevent the food and medicine from reaching your own people? Your own families, your neighbors? Because if you do, not only will God condemn you in the other life, but you will also be condemned by the law because that is an international crime, a crime against humanity, that is very clear and they must make the right choice because the moment to make a decision has arrived," Rubio said.
Rubio spoke at the Simon Bolivar Bridge, which thousands of Venezuelans cross every day to flee the country´s economic crisis or to buy essentials like food and medicine. He was accompanied by delegates sent by Venezuela´s self-proclaimed interim president Juan Guaido, Florida congressman Mario Diaz-Balart, U.S. Agency for International Development administrator Mark Green and U.S. Ambassador to the Organization of American States Carlos Trujillo.
"You are not alone, freedom is coming. The ocean of waves of freedom are growing. What is inevitable, what will happen is the absolute freedom of the Venezuelan people," Diaz-Balart said.
Rubio has advocated early on for the global recognition of Juan Guaido as Venezuela´s interim president, often tweeting and addressing Maduro directly, sending firm messages that his time in power is coming to an end.
"Maduro thinks he can wait this out. Just buy time until the protests lose momentum and the world loses interest" Rubio tweeted on Saturday. "Not gonna happen! It only gets worse for him from here."

Maduro thinks he can wait this out. Just buy time until the protests lose momentum & the world loses interest.
Not gonna happen!
It only gets worse for him from here. I know for a fact that several in his inner circle are looking for an exit strategy. Just a matter of time. https://t.co/zV5b6MHvy9

During his visit to the Simon Bolivar Bridge, Rubio called Guaido, saying that while they were currently not together, "soon, Mr. President, we will be standing together in a free Venezuela."
Afterwards, Rubio and those accompanying him visited the Tienditas Bridge where U.S.-provided humanitarian aid is currently being stored.
"We have over 300 metric tons of food and medicine ready to deliver to the suffering people inside Venezuela. #MaduroCrimeFamily is doing everything they can to keep this from reaching their own people. This is pure evil," Rubio tweeted from inside the warehouse, surrounded by bags of USAID supplies.
Rubio, Diaz-Balart and Trujillo also walked along the bridge to the gates and containers that are currently blocking access to the Venezuelan side, placed by Maduro and guarded by Venezuela’s military under his command.
"Those containers behind us were put there by a terrorist, criminal regime. It isn´t going to work. Food and medicine will reach the people of Venezuela," Rubio tweeted, along with a video of himself, Diaz-Balart and Trujillo standing in front of the containers.
Guaido has vowed the aid will enter Venezuela, and announced that on Feb. 23 he will make the first attempt to bring aid across the border. He has asked for people to volunteers to help deliver it to those inside the country who need it the most.
According to Guaido, over half a million Venezuelans have signed up to volunteer to distribute aid in the country.
Copyright © 2019, ABC Radio. All rights reserved.