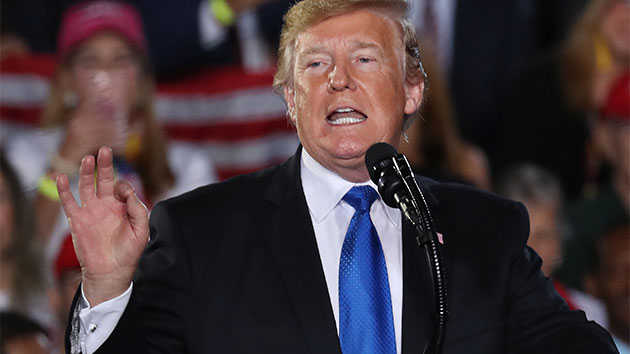 Joe Raedle/Getty Images(WASHINGTON) — Following President Donald Trump’s declaration of a national emergency on Friday, progressive organizers across the U.S. scrambled together in a show of solidarity to protest against Trump in the backdrop of President’s Day.
Reggie Hubbard, a congressional liaison and Washington, D.C., strategist for Move On said progressives have decided to come together "to show this is not how the way that we conduct the government."
On Monday, the group held over 250 events with 30,000 people registered to attend rallies in efforts to "protest to fight Trump’s fake crisis and racist deportation forces," Hubbard said. The group held events across the U.S. with local leaders and members of Congress including Reps. Maxine Waters, D-Calif., Rashida Talib, D-M.I., and Ayanna Pressley, D-M.A., in their respective districts. The events were planned in only two days, Hubbard said.
The national emergency declaration has ignited progressives who said they see splinters within the Republican Party. The largest splinter, according to progressives, is the Republicans inability to pass legislative funding to support the president’s campaign promise of a border wall along the southern U.S. border.
"This fake national emergency is splintering the Republican party, that is good news," Elizabeth Beavers, associate policy director of Indivisible, told a crowd of several hundred outside of the White House on Monday. "It is the first emergency you can plan three weeks in advance."
Center for American Progress President Neera Tandden took a jab at Republicans, declaring conservative commentator and author Ann Coulter "controls our laws more than Congress right now."
Earlier in the year, Trump publicly unfollowed Coulter on Twitter after she criticized his lack of action on the border wall.
Following his Rose Garden declaration, Coulter said in an radio interview that "the only national emergency is that our president is an idiot."
Trump attempted to establish distance between himself and Coulter on Friday, telling reporters "I don’t know her. I hardly know her. I haven’t spoken to her in any way over a year but the press loves saying 'Ann Coulter.'"
A number of rally participants said they were suing or planning to sue the Trump Administration’s attempt to use the national emergency to build the wall.
During Trump’s Rose Garden remarks announcing the National Emergency on Friday, the president said bluntly that he expected his decision to play out in court. "Look, I expect to be sued. I shouldn't be sued. Very rarely do you get sued when you do a national emergency."
Several organizers have announced they plan on calling on Congress to act, including Code Pink co-founder Medea Benjamin.
"Starting tomorrow we're gonna be in the halls of congress. We are going to demand that the Congress people pass legislation that says no to the National Emergency. We're going to support the ACLU and Public Citizen and other groups that are suing the administration over the fake emergency." Benjamin said.
Code Pink and other groups are planning organizing meetings as soon as this week.

"This is something that is bringing together a lot of different organizations that care about different issues," Benjamin added.