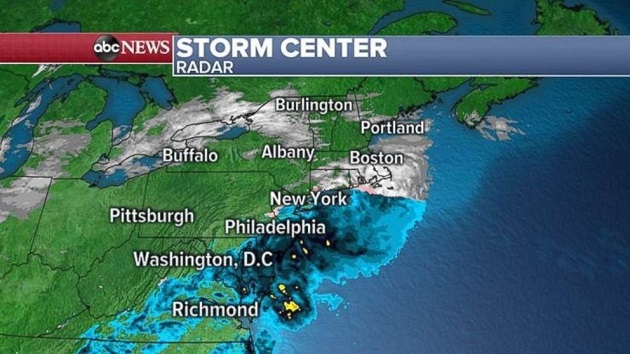 ABC News(NEW YORK) — The latest winter storm tracked from the Midwest to the Northeast overnight, delivering snow from the Plains into New England.
Des Moines, Iowa, saw 8 to 10 inches of snow on Sunday, as Wisconsin, northern Illinois and parts of Michigan each saw a few inches, creating low visibility and hazardous traveling conditions.
Mixed precipitation was reported early Monday morning north of New York City. South of there, major cities including Philadelphia and Washington saw mostly rain. Locally, some areas in Rhode Island and Massachusetts could see 4 inches of snow Monday morning as winter weather advisories remained in effect throughout much of the region.
Southern Colorado and northern Arizona saw about 6 inches of snow overnight, with colder air tracking in behind the system as it headed east. Parts of Interstate 5 in California saw delays because of snowfall.
A new major storm is expected to develop on Tuesday. Snow likely will be confined west of the Great Plains through the early morning, with evening snow forecast in parts of Oklahoma, Kansas and Missouri.
More dangerous than these snowfalls, however, will be heavy and persistent rainfalls in the Mississippi River Valley.
From Wednesday afternoon into early Thursday, the new storm will push into the Northeast, which again should expect another round of snow and then a winter mix.
More than 6 inches of snow is possible for parts of Iowa as well as northern Virginia and West Virginia, with a swath of the Mississippi River Valley potentially seeing 4 inches of rain, causing a moderate risk of flash flooding.
This weather pattern should persist into the weekend and more storms will follow a similar track, meaning several rounds of heavy rain are expected in the Southeast. Some parts of the South may see 6 to 10 inches, raising the risk of flooding throughout Alabama, Mississippi, Arkansas, Tennessee and Kentucky.
Copyright © 2019, ABC Radio. All rights reserved.

Hundreds of thousands of motorcycle riders expected in Florida for Bike Week
Biden takes ‘giant step forward’ on COVID-19 relief, but challenges lie ahead
Warmest air since November expected across parts of US next week
Cold blast hits Northeast as new storm gets ready to slam West, from California to Washington
Senate takes up COVID-19 relief package as GOP aims to block passage
Capitol on high alert but quiet amid March 4 threat