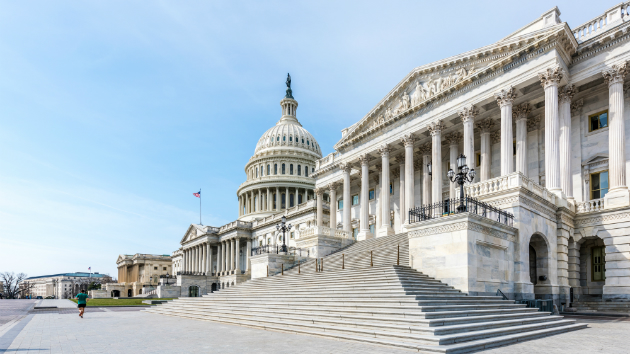 Matt Anderson/iStock(WASHINGTON) — A pair of House Democrats are launching a new probe of what they called the “complex web of relationships” between members of the National Rifle Association and Russian individuals with close ties to the Kremlin.
In a letter members said they were sending to NRA CEO Wayne LaPierre, a copy of which was shared with ABC News, Rep. Ted Lieu of California and Rep. Kathleen Rice of New York expressed concern about the NRA’s attempts to distance itself from any formal involvement in a now infamous trip to Moscow undertaken by a group of its high-ranking members.
While the NRA’s outside counsel William Brewer told The New York Times that LaPierre “was opposed to the trip” and even prohibited staff members from joining the delegation out of concern that it would be perceived as officially sanctioned, internal NRA emails and photos posted on social media reviewed by ABC News appear to show the organization was significantly involved in planning it.
Lieu, a member of the House Committee on the Judiciary, and Rice, a member of the House Committee on Homeland Security, suggest that the discrepancy might be evidence of a broader deception and requested a full accounting of any communications, meetings and monetary transactions between the NRA officials and Russia-linked individuals.
“We are disturbed by the lack of transparency the NRA has demonstrated surrounding the December 2015 trip to Moscow,” wrote Lieu and Rice on Feb. 15. “Furthermore, we are concerned that this extends to other allegations that have been made against the organization as it relates to Russia.”
Citing what they called the NRA’s “unusually close relationship” with the Trump campaign, as well as its record spending in support of then-candidate Donald Trump, Lieu and Rice ultimately questioned whether the Kremlin might have used the NRA to funnel foreign money into the U.S. election system.
“How much money did the NRA receive from Russia or Russia-linked individuals or entities during the 2016 election cycle?” the lawmakers asked. “Did the NRA use any of that money in their 2016 election campaign contributions?”
It’s not the first time the NRA will have faced questions about its election spending. After initially telling ABC News the organization had received a single contribution of less than $1,000 from one Russian individual, the NRA later disclosed two dozen additional contributions from Russian donors totaling approximately $2,512.85.
A similar probe is already underway in the Senate, but the Democrats hold the majority in the House, meaning their requests for documents or interviews can be compelled by subpoena — an authority controlled by the party in power.
Brewer, the NRA’s outside counsel, did not immediately respond to a request for comment, but in response to previous questions, he pointed ABC News to the statement issued to the Times, which highlighted LaPierre’s concern back in 2015 that the group traveling to Moscow "not be viewed as representing the NRA."
“When he became aware of the details of the trip, Wayne was personally opposed to it," Brewer told ABC News through a spokesman. The spokesman also noted that the group’s president at the time, Allan Cors, opted not to attend at LaPierre’s suggestion, and the NRA declined to send staff to Moscow with the group, as they had typically done on officially sponsored travel.
The December 2015 trip, which involved meetings with senior Kremlin officials, has attracted increased scrutiny in the wake of the arrest and guilty plea to conspiracy charges of gun rights activist and alleged Russian agent Maria Butina, who was involved in planning the trip. Her alleged efforts to infiltrate the NRA as part of a covert influence operation in the United States have come to light in court filings by U.S. prosecutors.
Dozens of pages of email correspondence between August 2015 and November 2016, shared with ABC News by a source who asked not to be identified, detail Butina’s efforts to organize the summit, which brought high-ranking NRA members and powerful Russian nationals together in Moscow in December 2015, a trip championed by Butina’s fledgling gun-rights group “Right to Bear Arms.”
The American delegation met with Butina and the man described by U.S. officials as her Russian handler, Alexander Torshin, a wealthy politician who at the time was deputy governor of the Russian Central Bank; Dmitry Rogozin, Russia’s then-deputy prime minister who was sanctioned by the U.S. Treasury in 2014; and Russian Foreign Minister Sergey Lavrov, a powerful member of Russian President Vladimir Putin’s inner circle.
This latest probe follows the investigation launched by Sen. Ron Wyden, an Oregon Democrat and the ranking member of the Senate Finance Committee, who is reportedly preparing a detailed report on the trip. Wyden has already publicly disputed the NRA’s attempt to downplay its involvement in organizing the excursion.
“It’s not credible for the NRA to claim that they played no official role in the 2015 Moscow trip,” Wyden told ABC News.
Internal emails obtained by ABC News show that an NRA employee, Nicholas Perrine, worked directly with Butina to coordinate travel arrangements for the trip’s attendees. A 2016 wedding announcement in Politico identified Perrine as a special assistant to the president of the NRA.
A source familiar with the arrangements told ABC News that the NRA ultimately did pay some travel-related expenses and assisted with coordinating some aspects of the trip, “an accommodation to the members who made the trip of their own accord.”
An attorney for Butina, who is in jail as she continues to cooperate with investigators under the terms of her plea agreement, declined to comment.
Wyden has declined to discuss the specific information his office has obtained to date but pledged to continue his probe, citing what he characterized as the NRA’s changing positions on Russia-related matters.
“Certainly that has caused many of my colleagues to want additional information on these issues,” Wyden told ABC News. “And our investigation is going to continue.”
Copyright © 2019, ABC Radio. All rights reserved.