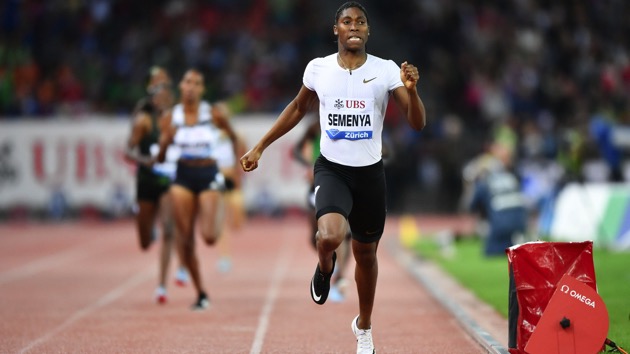 FABRICE COFFRINI/AFP/Getty Images(LONDON) — South African athlete Caster Semenya was in court on Monday for a landmark hearing that is expected to have major implications for gender in sports.
Semenya, 28, an Olympic gold medalist, went to the Court of Arbitration (CAS) for Sport in Lausanne, Switzerland, appealing a controversial measure introduced by track and field’s governing body to lower the permissible testosterone levels in female athletes.
Semenya is seeking to overturn the new Eligibility Regulations for Female Classification, introduced in April by the International Association of Athletics Federations (IAAF). The new regulations mean that athletes of a ‘difference in sexual development’ condition with a high amount of testosterone in their systems will not be able to compete in female races.
The number of races this applies to ranges from 400m to 1 mile — most of which Semenya competes in as a middle distance runner.
If the new rules survive challenges, Semenya would likely have to take hormone medication to reduce her levels of testosterone in order to compete in the Olympics next year.
“The female category in sport is a protected category,” the IAAF said in a statement on Monday. “This standard is necessary to ensure fair competition for all women.”
Controversy surrounding Semenya’s gender status has followed her since she burst onto the athletics scene in 2009 by winning the 800m gold at the World Championships at the age of 18. The IAAF investigated Semenya with gender verification tests after her win in September of that year. Though the results were never published, Semenya returned to the sport 11 months later, and has enjoyed considerable success since.
Transgender debate in elite sport
The CAS hearing is the latest focal point in a long-running debate around the relationship between science and gender in sports.
The Times of London newspaper reported last week that the IAAF will argue that Semenya is biologically male because of her high testosterone levels.
“If a DSD athlete has testes and male levels of testosterone, they get the same increases in bone and muscle size and strength… that a male gets when they go through puberty, which is what gives men such a performance advantage over women,” the IAAF said in a statement published by the Times of London. “Therefore, to preserve fair competition in the female category, it is necessary to require DSD athletes to reduce their testosterone down to female levels before they compete at international level.”
The IAAF published research in 2017 in the British Journal of Sports Medicine which suggested that women runners with high testosterone levels performed 3 percent better than their rivals, giving them a "significant competitive advantage."
However, the scientists Roger Pielke, Ross Tucker and Erik Boye published a paper in the The International Sports Law Journal last week challenging these claims. The paper, entitled ‘Scientific integrity and the IAAF testosterone regulations,’ calls the testosterone rule change "discriminatory, irrational, and unjustifiable."
Tennis icon Martina Navratilova weighed in on the debate in an article for the Sunday Times last weekend, arguing that if a man were to take hormones to compete in women’s events it would be “insane” and “cheating.”
However, Dr. Rachel McKinnon, the first transgender woman to win a track world title in the women’s age 35 to 44 spring category at the UCI Master World Championships in 2018, told ABC News that the IAAF’s law was “ill-conceived, discriminatory, and based on a flawed, biased study.”
“Natural testosterone is the only physical characteristic for which we ban anyone from sport, and we only do this to women,” she told ABC News. “That is inherently unjust, particularly as we permit much larger competitive advantages due to characteristics such as height than the IAAF is attributing to testosterone. This completely undercuts the IAAF's justification for their new policy. So I expect Caster to win, but there's no guarantee."
Copyright © 2019, ABC Radio. All rights reserved.