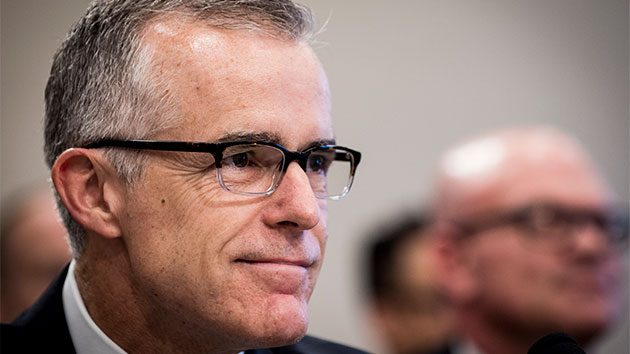 Pete Marovich/Getty Images(WASHINGTON) — The former deputy director of the FBI, Andrew McCabe – who took an oath to protect the U.S. homeland – said he had a professional obligation to open up criminal investigations targeting President Donald Trump.
"If we failed to open an investigation under [the] circumstances, we wouldn’t be doing our jobs," McCabe told CBS News' "60 Minutes" in a much-anticipated interview Sunday night, citing concerns "about a national security threat."
McCabe, a lifelong Republican who spent two decades fighting terrorism and crime for the FBI, was specifically referring to Trump’s actions surrounding James Comey’s firing as FBI director in May 2017.
Monday morning, Trump dismissed McCabe's comments as a bunch of "lies" from a "disgraced" official.
In the interview with CBS News, McCabe described Trump as a president who was almost "gleeful" over Comey’s axing, who repeatedly attacked the FBI’s investigation of possible ties between Trump’s 2016 presidential campaign and Russian operatives, and who asked Comey in a private meeting "to discontinue the investigation of Mike Flynn," Trump’s national security adviser who lied to FBI agents about his contacts with the Russian government.
Trump even allegedly asked Deputy Attorney General Rod Rosenstein "to include Russia in [a] memo" justifying the FBI director’s removal, but Rosenstein didn’t do that, according to McCabe.
"Put together, these circumstances were articulable facts that indicated that a crime may have been committed," McCabe said. "The president may have been engaged in obstruction of justice in the firing of Jim Comey."
As the acting FBI director after Comey's departure, McCabe said he also wanted to know whether Trump may have been acting in coordination with Russia, who McCabe called "our most formidable adversary on the world stage."
All of Trump’s actions made McCabe and others at the FBI wonder: "Is there an inappropriate relationship, a connection between this president and our most fearsome enemy, the government of Russia?" McCabe recalled.
The president’s moves concerned federal law enforcement officials so much that Rosenstein allegedly "offered to wear a wire into the White House," according to McCabe.
"He said, 'I never get searched when I go into the White House. I could easily wear a recording device. They wouldn’t know it was there,'" McCabe added.
Justice Department officials close to Rosenstein have suggested any mention of a wire was in jest, but McCabe insisted in his interview Sunday night that Rosenstein "was absolutely serious."
Spokespeople for Rosenstein have repeatedly stated that he never approved use of a wire and never took any steps to make it happen.
Regardless, the FBI’s general counsel killed the idea as soon as it was presented to him, according to McCabe.
"I think the general counsel had a heart attack," McCabe recalled. "And when he got up off the floor, he said, 'That’s a bridge too far. We’re not there yet.'"
Nevertheless, McCabe said he opened up the investigations targeting Trump after Comey’s firing "to put the Russia case on absolutely solid ground in an indelible fashion, [so] that were I removed quickly or reassigned or fired, the case could not be closed or vanish in the night without a trace."
In the interview, McCabe recounted how, during one "frenzied chaotic conversation" after Comey’s firing, Rosenstein "threw out" the possibility of using the 25th Amendment to oust Trump from office.
"[He] discussed it with me in the context of thinking about how many other cabinet officials might support such an effort," according to McCabe.
In a statement, a Justice Department spokesman insisted "there is no basis to invoke the 25th Amendment," and Rosenstein was not "in a position to consider invoking the 25th Amendment."
Federal prosecutors, meanwhile, are currently deciding whether to bring charges against McCabe for allegedly misleading federal investigators about his role in leaking information to a reporter.
After a report from the Justice Department’s inspector general last year detailed McCabe’s alleged falsehoods, McCabe was fired from the FBI, just days before he was set to retire.
In the interview with CBS News, McCabe maintained that he did not intentionally mislead anyone.
"There's absolutely no reason for anyone and certainly not for me to misrepresent what happened. So no. Did I ever intentionally mislead the people I spoke to? I did not. I had no reason to. And I did not," McCabe said.
In a Twitter post on Monday, however, Trump said McCabe was "fired for lying, and now his story gets even more deranged."
"He and Rod Rosenstein … look like they were planning a very illegal act, and got caught," Trump added.
The new chairman of the Senate Judiciary Committee, Lindsey Graham, R-S.C., has said he will investigate whether McCabe and others were planning a "bureaucratic coup."

McCabe’s interview with CBS News was the start of a weeks-long media tour for McCabe, who is promoting his new book, "The Threat: How the FBI Protects America in the Age of Terror and Trump.