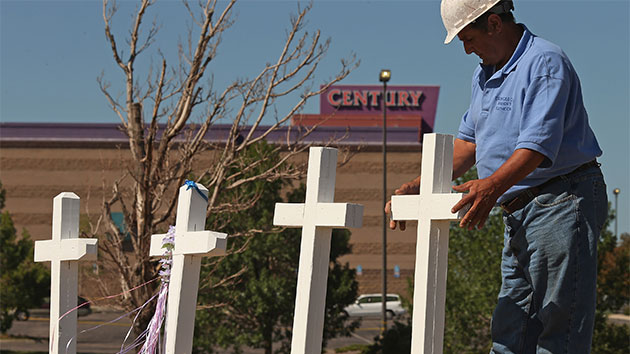 Chip Somodevilla/Getty Images(AURORA, Ill. ) — Greg Zanis' work can be seen across the country. When a mass shooting unfolds in the U.S., he heads to the affected town with an individualized cross assembled for each victim.
But now, with a mass shooting in Aurora, Illinois, Zanis is building crosses for his own community.

'They want their family member to be remembered'
The cross building began when Zanis' father-in-law was killed in Aurora in 1996, he said.
"I had the privilege of having the prayer coalition come over and help me with my grief," Zanis, 68, told ABC News on Monday. "A few months later there was a 6-year-old killed in Aurora … and his mom asked if I'd make a cross for her son."
That's when Zanis, a master carpenter, started offering to make crosses for anyone anytime and to deliver them free of charge. He also makes symbols of other religions.
Among the first of Zanis' projects was for the shooting at Columbine High School in Colorado, where 12 students and a teacher were killed in 1999.
Zanis retired in 2016, and after that, the trips became more frequent.
Last year, he traveled to Parkland, Florida, where 17 students and staff were shot dead at Marjory Stoneman Douglas High School on Feb. 14, 2018.
Then there was Santa Fe High School in Texas, where 10 people were killed in May 2018.
He went to Las Vegas to bring new crosses one year after the October 2017 mass shooting, which killed 58 people.
And also in October 2018, he went to the Tree of Life synagogue in Pittsburgh, where 11 worshipers, including a 97-year-old woman, were gunned down.
"That was the first time I only made Jewish stars instead of crosses," Zanis noted.
The month after the Pittsburgh synagogue shooting, Zanis headed to Thousand Oaks, California, where 12 people were shot to death at the Borderline Bar & Grill.
In Thousand Oaks, he set up the 12 crosses at 2 a.m., he said, to stay under the radar.
"These family members, they want their family member to be remembered," Zanis said. "It's not about me."

'Aurora's my town'
But that anonymity changed on Friday, when five employees were killed in a mass shooting at the Henry Pratt manufacturing plant in Aurora, Illinois, because for Zanis, "Aurora's my town."
Zanis moved to Aurora, where his wife was from, in the 1970s, and they raised five children in town.
As the gunfire broke out, Zanis was working in his garage — on the same street as the Aurora police station.
"A slew of 10 squad cars went by … and every 30 seconds, another car, another car," he said.
Zanis said his daughter came into the garage and told him there was an active shooter in Aurora.
"This is the last thing I wanted, for this to happen so close to my house," he said, his voice cracking.
Zanis said he put up five crosses early Saturday morning. Once the victims' identities were released, he said he swapped out the crosses for new ones that included each person's name.
Zanis' role as a cross builder makes him a natural support system — he said he's met with four of the five victims' families so far — but this mass shooting is certainly different for him.
"I don't have the luxury of going home from another place," he said. "I'm not going to be able to get away from this."
"I'm able to counsel people," he said, "but I think I'm going to need counseling."

"It's not supposed to happen on our grounds here," he said. "I just can't stop crying."