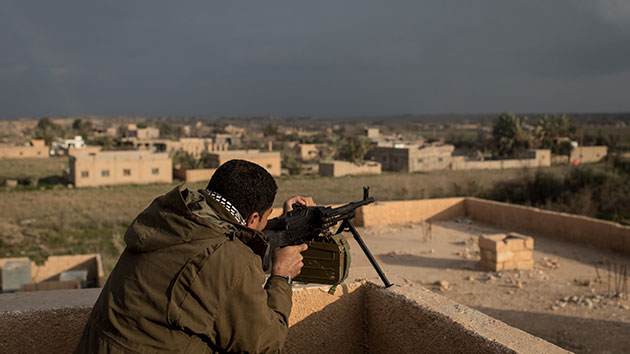 Chris McGrath/Getty Images(WASHINGTON) — With U.S.-backed forces closing in on ISIS in Syria, young mother Hoda Muthana is pleading for a second chance and the opportunity to return home to her family in Alabama.
"I realized I've made a big mistake and I know I've ruined my future and my son's future and I deeply, deeply regret it," she said in an interview with The Guardian newspaper.
Muthana is one of 1,500 foreign women and children living in a Kurdish-run refugee camp in northern Syria.
Muthana's family lawyer, Hassan Shibly, told ABC News the young mother was "brainwashed" by ISIS and now feels "tremendous remorse."
"This is a young, vulnerable woman who was brainwashed and manipulated by monsters who took advantage of her," Shibly said in an interview that airs on Good Morning America Tuesday morning. "Hooda is absolutely disgusted by the person she became while under the spell."
In 2017, Muthana's father told ABC News' Diane Sawyer that he'd been proud when she seemed to become more devout about religion. He said he had no idea that she was secretly taking cues from ISIS recruiters sending her messages over the phone.
"I never thought in my life that it would happen to us, to me, to my family, but it happened," he said. "It could happen to any other family."
Muthana, who now has an 18-month-old son, left Alabama four years ago at the age of 19. She spread ISIS propaganda online, calling for attacks on Americans.
According to AL.com, she tweeted messages encouraging people to "'spill American blood."
Now, after surrendering to Kurdish authorities, she told the Guardian that she fears for her safety.
"From what I heard, if they were to read my messages, I would have been killed," she said.
Muthana has been married three times to ISIS fighters. Each time, she was made a widow.
In a letter obtained exclusively by ABC News, she described herself as a "naive, angry and arrogant" young woman when she set out for Syria. Muthana said she thought she understood her religious beliefs and had stopped listening to her family.
"That was a big mistake," she said in the letter.
"During my years in Syria I would see and experience a way of life and the terrible effects of war which changed me. Seeing bloodshed up close changed me. Motherhood changed me. Seeing friends, children and the men I married dying changed me. Seeing how different a society could be compared to the beloved America I was born and raised into changed me," she said.
"Being where I was and seeing the ppl around me scared me because I realized I didn’t want to be a part of this. My beliefs weren’t the same as theirs. In my quiet moments, in between bombings, starvation, cold and fear I would look at my beautiful little boy and know that I didn’t belong here and neither did he. I would think sometimes of my family, my friends and the life that I knew and I realized how I didn’t appreciate or maybe even really understand how important the freedoms that we have in America are. I do now. To say that I regret my past words, any pain that I caused my family and any concerns I would cause my country would be hard for me to really express properly," she added.
Muthana is expected to be brought home to face justice, which President Donald Trump has pushed other countries to do as well.
Muthana's family lawyer told ABC News she wants to return to the United States to be "accountable for her choices," and to hopefully be a powerful voice to ensure that others don't repeat the mistakes she made.
"She wants to make amends by doing her best to speak out and ensure that she can protect other young individuals being brainwashed and taken advantage of in the same way she has," Shibly said in the interview on GMA. "She's willing to risk her life right now to condemn ISIS."

Warm air spreading across Central and Eastern US with record highs possible
Warmest air since November expected across parts of US next week
Defense secretary says US still assessing who carried out Iraq rocket attack
When will life return to normal? Experts consider what summer, fall might look like
A year of COVID-19: What was going on in the US in March 2020
13 killed in California crash allegedly breached Mexico fence, entered US illegally