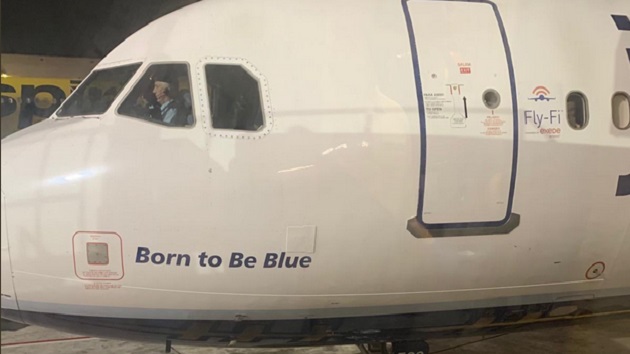 @YQRamos/Twitter(MIAMI) — "Baby on board" was given a whole new meaning on one JetBlue flight late Friday.
JetBlue flight 1954 was en route from Luis Muñoz Marín International Airport in San Juan, Puerto Rico, to Fort Lauderdale-Hollywood International Airport in South Florida when a passenger gave birth to a baby boy, airline spokeswoman Tamara Young told Miami ABC affiliate WPLG.
The crew and medical professionals on the plane helped to deliver the baby, Young said.
The plane left San Juan at 9:44 p.m. AST and landed in Florida two hours and 40 minutes later at 11:24 p.m. EST — with one more passenger added to the itinerary.
"We'd like to thank the crew and medical professionals on board for their quick action under pressure, and wish the new mother and son all the best," Young said.
Both mom and baby are doing well, the airline said.
Yaqui Ramos, with JetBlue ground operations, shared photos on Twitter of Broward County paramedics attending to the new baby in the jetway bridge at the airport.
Coincidentally, the name of the airplane, which Ramos said was newly in service, was "Born to Be Blue."
And even with the new baby on board, the plane arrived 11 minutes early.
Copyright © 2019, ABC Radio. All rights reserved.