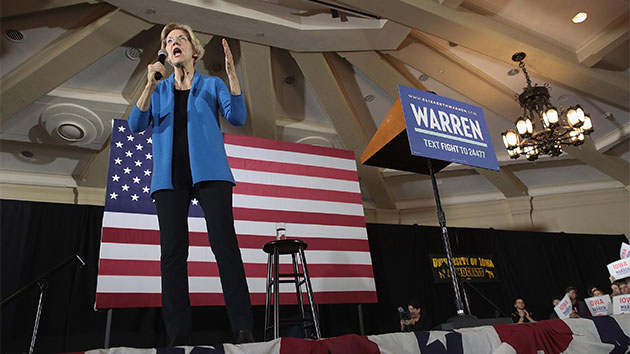 Scott Olson/Getty Images(WASHINGTON) — Sen. Elizabeth Warren, D-Mass., formally threw her hat in the ring on Feb. 9 to run against President Donald Trump in his 2020 reelection bid.

Warren, 69, launched her campaign in Lawrence, Massachusetts in front of a crowd of about 3,500 people, according to campaign staff. She called for an end to corruption and economic equality.

“This is the fight of our lives,” Warren said. “The fight to build an America where dreams are possible, an America that works for everyone. I am in that fight all the way.”

Warren’s announcement elicited a response from Trump within hours.

“Will she run as our first Native American presidential candidate,” Trump tweeted. “Or has she decided that after 32 years, this is not playing so well anymore?”

Today Elizabeth Warren, sometimes referred to by me as Pocahontas, joined the race for President. Will she run as our first Native American presidential candidate, or has she decided that after 32 years, this is not playing so well anymore? See you on the campaign TRAIL, Liz!

In 2018, Warren received backlash for publishing the results of a DNA test in an attempt to prove her Native American ancestry. The Cherokee Nation released a statement soon after that Warren’s DNA test “dishonor[ed] legitimate tribal governments and their citizens, whose ancestors are well documented and whose heritage is proven.”

Warren has expressed regret on multiple occasions for her decision to take a DNA test, including a personal apology to the Cherokee Nation, according to the tribe. She even faced new fallout the week before her announcement after a Washington Post report that she had identified herself as "American Indian" on an 1986 registration card for the State Bar of Texas.

Trump frequently plays on this controversy and often refers to Warren as "Pocahantas." Trump’s campaign manager, Brad Parscale, released a statement before Warren made her official announcement to run for president calling her a “fraud.”

"Elizabeth Warren has already been exposed as a fraud by the Native Americans she impersonated and disrespected to advance her professional career, and the people of Massachusetts she deceived to get elected,” the statement read.

Warren fired back on stage, calling Trump’s administration “the most corrupt in living memory.”

Here’s everything you need to know about the 2020 hopeful:

What she used to do: Warren attended George Washington University, but ultimately graduated from the University of Houston in 1970. She worked as a special education teacher. In 1976 she graduated from the Rutgers School of Law. She went on to work as a law professor more than 30 years, eventually at Harvard University.

Family Tree: Elizabeth Warren was born in 1949 to Pauline and Donald Herring. Warren has two children — Amelia and Alexander — with her first husband, Jim Warren. Today, Warren lives in Cambridge, Massachusetts with her husband, Bruce Mann, and their golden retriever, Bailey. Mann is a professor at Harvard University. They have three grandchildren.

Key life/career moments: During the 2008 financial crisis, Warren served as Chair of the Congressional Oversight Panel for the Troubled Asset Relief Program. She was also at the forefront of the movement to create the Consumer Financial Protection Bureau.

In 2016, Warren received attention for her interaction with Wells Fargo CEO John Stumpf during a hearing about allegations that bank employees created accounts without customers' authorization. Warren told Stumpf: "You should resign… You should give back the money that you gained while this scam was going on, and you should be criminally investigated by the [Department of Justice] and the [Securities and Exchange Commission]."

In 2017, Warren read a 1986 letter in which Coretta Scott King criticized Jeff Sessions. Warren was formally silenced by a vote prompted by her Republican colleagues. Warren later read the letter in a Facebook Live video, which currently has 13 million views.

In December, Warren became the first woman to launch a presidential exploratory committee for the 2020 race.

What you might not know about her: She was written about by fellow 2020 presidential candidate Kamala Harris in a 2017 piece for TIME. She was also Massachusetts' first female U.S. senator.

What she has said about 2020: According to the New York Times, in December she told reporters: "I don’t think we ought to be running campaigns that are funded by billionaires, whether it goes through super PACs or their own money that they’re spending … Democrats are the party of the people."

At an event in Iowa on Jan. 4 Warren said: "I’m in this fight because I am grateful. My daddy ended up as a janitor and I had a chance to become a public school teacher, a college professor, and a united states senator. I am grateful to America down to my toes. I am grateful, but I am also determined."

In November, before her exploratory committee had been announced, Warren said, "The world changed in 2016, it changed again in 2018 and I believe it will change again in 2020."