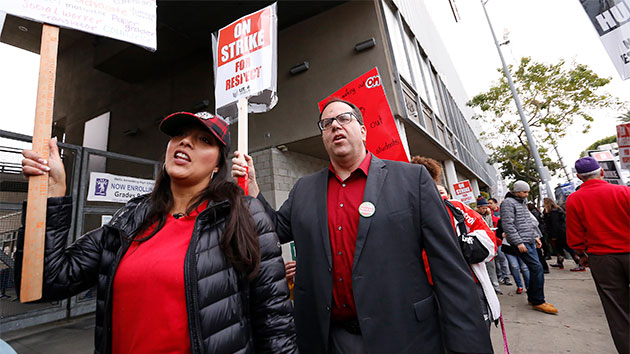 Al Seib / Los Angeles Times via Getty Images(OAKLAND, Calif.) — Having seen teachers score victories in Los Angeles, Denver and a string of states in their fights for higher wages and better working conditions, more than 3,000 educators in Oakland, California, have voted to go on strike this week.

"Oakland teachers cannot afford to live in Oakland," Keith Brown, president of the Oakland Education Association, said during a news conference on Saturday. "One out of five leaves each year. Five-hundred classrooms are left with inexperienced teachers."

Teachers voted overwhelmingly to walk off their jobs on Thursday, Brown said.

To stem the tide of teachers exiting the Oakland Unified School District, which has more than 37,000 students, the union is asking for a 12 percent raise over three years, smaller class sizes and more support staff.

The school district is offering a 5 percent raise, retroactive to when the union's contract expired in July 2017.

The union and the school district began bargaining on a new contract in December 2016, but after 30 negotiating sessions encompassing 200 hours of bargaining, an impasse was declared on May 18, 2018. Both sides agreed to mediation, but that failed to break the stalemate.

School District Superintendent Kyla Johnson-Trammell said she is still hopeful that an agreement can be reached to avoid the first teachers' strike in Oakland in 23 years.

"Despite our challenges, we are prepared with a comprehensive proposal to reach an agreement," Johnson-Trammell said in a statement over the weekend. "If both sides are committed to settling the contract before a strike occurs — and we are — an agreement can certainly be reached without disrupting the educational experience for students, families and staff."

If Oakland teachers walk out of classrooms this week and hit the picket lines, the job action will become the latest in a string of public school teacher strikes that have swept the nation in the past 12 months.

The wave of teachers strikes started in West Virginia, where one year ago this week more than 20,000 teachers across the state walked off the job and formed picket lines for nearly two weeks before Gov. Jim Justice signed a bill granting educators and other state employees a 5 percent pay raise.

Randi Weingarten, president of the American Federation of Teachers, said the West Virginia strike was a game changer that inspired teachers across the nation.

"I don't like when people say, 'Well if they can do it in West Virginia, we can do it' because that is really insulting to West Virginia. But it is a sense that they saw themselves with it. It inspired them and they saw that they could do it too," Weingarten told ABC News.

On the heels of the success of West Virginia teachers, educators in Oklahoma, Kentucky and Arizona also went on strike for higher pay and better working conditions.

"What's happened in all these places is over the course of the last 10 to 15 years is that people have tried to make good schools and students front and center have gotten demeaned, disparaged, called names, schools have been divested," Weingarten said. "And so what has happened … is a sense of possibility that when you join together you can indeed be stronger together, but you have to join together on a mission that the community really adopts."

Earlier this month, Weingarten and other education leaders testified at hearings held by the House Education and Labor Committee on a bill that would pump $100 billion into the nation's public schools over the next decade.

"The reason why this strike wave has occurred is because teacher pay and benefits and working conditions have gotten so bad. It's not that unions have gotten so strong," Kenneth Dau-Schmidt, a labor and employment law professor at Indiana University's Maurer School of Law, told ABC News.

Dau-Schmidt noted that the wave of strikes started in states with the lowest paid teacher in the nation that have no comprehensive collective bargaining statutes, meaning their school budgets are set by state legislatures and not local school boards like in Los Angeles and Denver.

He said in states like West Virginia, Oklahoma, Arizona and Kentucky, strikes by teachers are considered illegal and educators risked being fired for participating in them. But because teachers in those states showed solidarity in their job actions, state government leaders had little choice but to bargain.

"The problem is their compensation got so far behind the market that the teachers felt they had to do something and the school boards, even if they had wanted to discharge all those teachers couldn't have possibly replaced them all because they're offering substandard wages," Dau-Schmidt said.

"It wouldn't have been possible to replace all those teachers at once with quality replacements in a market that's tight because fewer people are going to be trained to be teachers now because the word is out that the compensation is not that good," he said.

Since the string of strikes began, some states have moved to compensate teachers to head off strikes.

"We see that a little bit in Indiana here where our governor has offered to pay off some of the pension liability so that would free up money for the school boards to give teachers raises for the next two years," Dau-Schmidt said.

Both Weingarten and Dau-Schmidt said that in most of the job actions parents have been on the side of the teachers.

"I think you've seen a lot of parent support for the strikers so far because parents realize the teacher is the third most important person in the world to each child after the mom and the dad, and they want good people there," Dau-Schmidt said. "They want them to be able to do their job and they want them to be adequately compensated. The only way to have good people doing a professional job is to treat them like professionals and pay them like professionals and give them decent working conditions."

Businesses continue with mask requirements despite states lifting mandates
Which states have dropped mask mandates and why
Teyonah Parris talks ‘WandaVision’ Easter eggs and why she feels “no pressure at all” in the MCU
‘The United States vs. Billie Holiday’, ‘The Queen’s Gambit’, George Clooney and more top AARP’s 2021 “Movies for Grownups” Awards
On ‘GMA’, embattled ‘Bachelor’ host Chris Harrison speaks out: “This franchise can be a beacon of change”
House Democrats pass election reforms as GOP moves to change voting laws