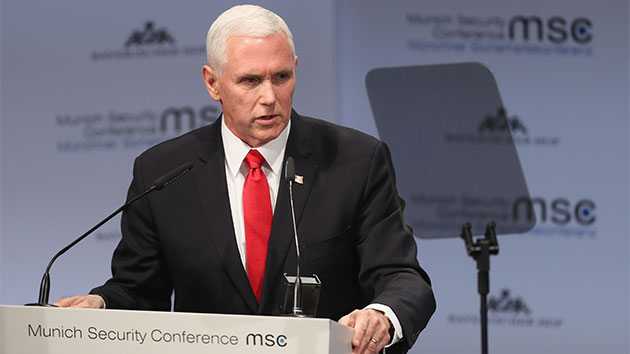 Alexandra Beier/Getty Images(MUNICH) — Vice President Mike Pence accused Iran of advocating for another Holocaust on Saturday as he finished up a European tour in which he threatened tougher U.S. sanctions against the country, and asked for other countries to follow America’s decision to withdraw from the Iran nuclear deal.

“The Iranian regime openly advocates another Holocaust and it seeks the means to achieve it,” Pence said while speaking at the Munich Security Conference on Saturday.

Pence’s latest remarks come on the heels of appearances at international conferences in Warsaw, Poland, and Munich, Germany, in which he repeatedly attacked Iran, and the Iran nuclear deal.

That deal, signed by the Obama administration in 2015 along with leaders from the U.K., France, Russia, China and Germany, offered Iran relief from economic sanctions in exchange for restricting its nuclear program. Trump announced that the U.S. would withdraw from the deal in 2018.

Along with accusations of state-sponsored terrorism, Pence blasted Iran during his week in Europe for anti-Semitism, going as far as to compare the country to Nazi Germany.

Pence visited Auschwitz on Friday, a former concentration camp in Nazi Germany-occupied Poland, and said he was “deeply moved.” As the vice president left Poland en route to Germany, he reflected on the trip, noting the importance of honoring Holocaust victims, and saying that ant-Semitism needed to be universally condemned.

Traveling to Munich to deliver his second international address, Pence condemned the Iranian regime for spewing the same “vile anti-Semitic hatred” that animated the Nazis in Europe.

During his Munich remarks, the vice president said Iran had “supported terrorist proxies and militias, Hezbollah and Hamas; exported missiles; fueled conflicts in Syria and Yemen; plotted terrorist attacks on European soil; and openly advocated the destruction of the State of Israel.”

Pence said that he had frank discussions with world leaders during his trip, but stopped short of suggesting any European nations had to immediately answer U.S. calls to withdraw from the Iran nuclear deal.