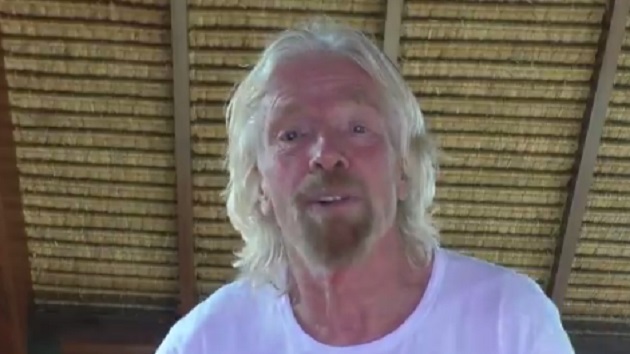 @richardbranson/Twitter(CUCUTA, Columbia) — Billionaire Virgin founder Richard Branson is taking on delivering relief to the people of Venezuela into his own hands.
Branson announced on Friday he will be throwing a massive fundraising concert in neighboring Colombia on Feb. 22.
Venezuela is in a tug of war for leadership between current President Nicolas Maduro and opposition leader Juan Guaido, who the U.S. has recognized as the rightful leader of the country. Guaido declared himself the country’s legitimate president on Jan. 23 following Maduro's re-election in a race that many countries, including the U.S., have called fraudulent.
Hunger, poverty and violence have wracked the country in recent years. The country’s paper currency has become worthless as some economists project inflation could reach 10 million percent this year.
"The world can no longer close its eyes to this unacceptable situation," Branson wrote in a release. "While diplomatic efforts to bring in humanitarian goods must kick into high gear, we all need to mobilise much-needed financial support, and we need to do it quickly.
"I know a thing or two about the music business, and I’m old enough to remember how George Harrison’s Concert for Bangladesh and Bob Geldof's LiveAid moved the world to action," he added. "And so I’ve offered to help organise an international benefit concert, Venezuela Aid Live, which myself and Bruno Ocampo are happy to announce will take place on February 22nd in Cucuta, Colombia, right on the Venezuelan border."
The Concert for Bangladesh, held on Aug. 1, 1971, featured Harrison, the former Beatles guitarist, and Indian sitar legend Ravi Shankar. The Madison Square Garden concert and live recording also included appearances from fellow Beatle Ringo Starr, Eric Clapton, Bob Dylan and Billy Preston. It raised millions of dollars for UNICEF, which was providing relief for Bangladeshis fleeing their country following war.
Geldof's LiveAid in July 1985 was a massive success, with concerts in London and Philadelphia raising money for the Ethiopian famine. Queen's performance became iconic, while other megastars performing included U2, David Bowie, Tom Petty, The Rolling Stones, The Who and Paul McCartney.
Branson has not yet announced any performers for the concert on Friday, saying only that "this massive concert will count with the participation of a list of major musicians of the Latin and English industry. As hours go by, more international artists are joining in."
The 68-year-old entrepreneur has said he hopes to raise $100 million over the next 60 days, according to the event's website.
Maduro is currently not allowing aid into the country. Maduro has called the effort to bring truckloads of supplies into Venezuela a pretext for a military invasion of the country and so far the armed forces have followed his orders to block the supplies at the border.
"We must break this impasse or many Venezuelans will be on the verge of starvation and death," Branson said in a post on Twitter.
Branson launched Virgin Records in 1972, Virgin Atlantic Airways in 1984 and expanded into telecommunications in the 1990s and 2000s.
Copyright © 2019, ABC Radio. All rights reserved.