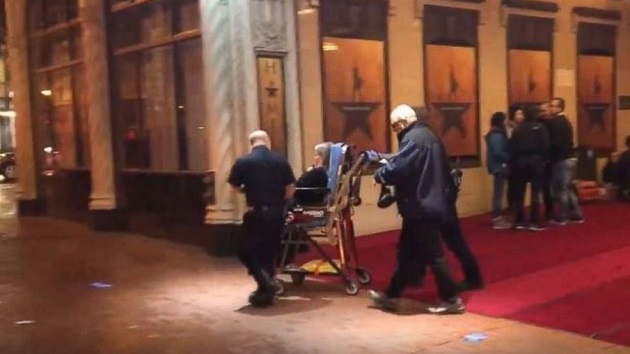 KGO(SAN FRANCISCO) — A medical emergency sparked panic and fears of an active shooter situation at a performance of "Hamilton" in San Francisco Friday night.
The incident happened at the SHN Orpheum Theatre when a woman suffered a medical emergency at about 10 p.m. San Francisco police said the woman collapsed at the same time as a scene on stage involving gunfire and audience members apparently though the woman might have been shot.
Theatergoers fled in a panic and the performance came to an abrupt conclusion.
In the resulting mayhem caused by the woman's medical emergency, three people suffered injuries. One person suffered a broken leg, according to the San Francisco Fire Department, while two other people suffered "moderate" injuries.
The woman who suffered the initial medical emergency is in critical condition.
"The original patient who required an AED [automated external defibrillator] had a return of pulses with CPR and paramedic and remains in critical condition," the fire department tweeted.
There was no shooter and no shots were fired.
"Hamilton had just died and what I saw, we were in the back of the orchestra, was someone stand up and get carried out. That's when someone screamed, 'Lights, lights,'" eyewitness Leo McCaffrey told San Francisco ABC station KGO.
The musical was almost over and was not continued, but attendees were allowed to go back in and get their belongings.
In a video posted by an attendee outside even the musical's performers can be seen going back in the theater to cheers.
The smash-hit "Hamilton" was written by Lin-Manuel Miranda and first debuted on Broadway in 2015. It tells the story of Alexander Hamilton, the country's first secretary of the treasury, his relationships with the other Founding Fathers and his feud with Vice President Aaron Burr. It won 11 Tony Awards in 2016, including Best Musical, Best Book of a Musical, Best Actor and Best Actress. It was nominated for five other awards.
The musical is being put on in San Francisco through Sept. 8. Its first showing was just on Feb. 12.
Copyright © 2019, ABC Radio. All rights reserved.