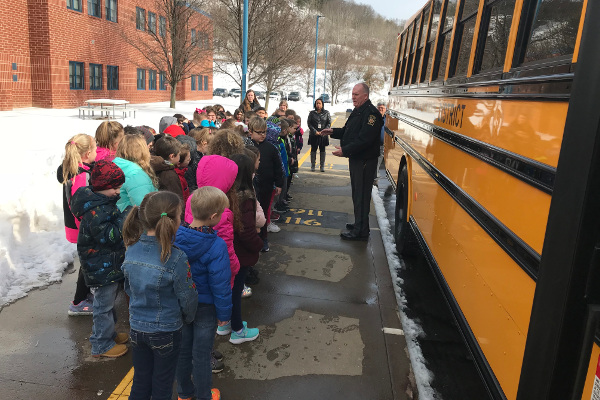 “School buses are the safest way for kids to get to and from school thanks in no small part to the work of bus drivers,” said Trooper Bruce Morris, Community Service Officer for Troop C. “This program allows us to show our appreciation for those drivers while at the same time reminding the public that school bus safety is everyone’s responsibility.”

During the celebrations, which were held this month at Clearfield, Ferguson Township, and Easterly Parkway elementary schools, students received Valentines to give their bus drivers as a way of saying thank you. Officers gave the students these, and other, tips for students while on or near a bus:

PennDOT reminds motorists the states’ School Bus Stopping Law requires they stop at least 10 feet away from school buses that have their red lights flashing and stop arm extended. Motorists must also stop when they are behind a bus, meeting the bus or approaching an intersection where a bus is stopped, and those following or traveling alongside a school bus must also stop until the red lights have stopped flashing, the stop arm is withdrawn, and all children have reached safety. If a physical barrier such as a grassy median, guide rail or concrete median separates oncoming traffic from the bus, motorists in the opposing lanes may proceed without stopping.

For more information on the school bus safety, visit www.penndot.gov/safety.