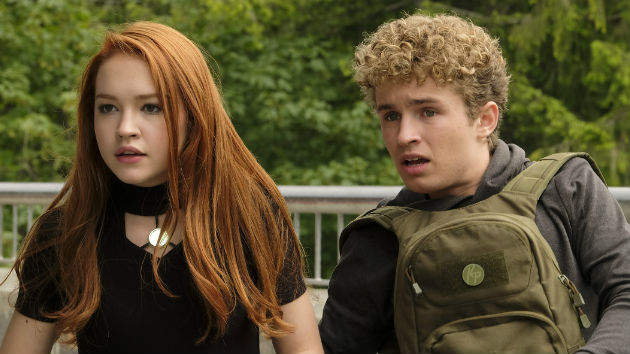 (L-R) Sadie Stanley, Sean Giambrone — Disney Channel/Jeff Weddell (LOS ANGELES) — Call me, beep me, if ya wanna reach me: Kim Possible is back!

The beloved Disney animated series is getting the live action treatment with a brand new movie premiering tonight on the Disney Channel.

Newcomer Sadie Stanley steps into the role of Kim, a young teen living a double life as a spy, and even sings a new version of the iconic theme song. In this iteration of the series, we see Kim starting high school with her best pal Ron Stoppable, played by The Goldbergs’ Sean Giambrone.

“[In] the cartoon, they're very strategic about when you see Kim struggle or see her not as perfect,” Stanley tells ABC Radio. “But in this movie, we actually do get to see her more vulnerable side. We see her struggle with her identity and she has these inner demons that she's working on and, you know, she's having a really hard time and she's not really used to that.”

Add to the mix a couple of old familiar foes and a new friend named Athena, played by Ciara Riley Wilson, who might just be a better spy than Kim, and you have a whole lot of drama for someone who is “so not the drama.”

The role of Kim Possible was originally voiced by Christy Carlson Romano, who makes a cameo appearance in the film as pop star Poppy Blu. Stanley says it was great having her on set.

Kim Possible debuts tonight on the Disney Channel at 8 p.m. Disney is the parent company of ABC News.