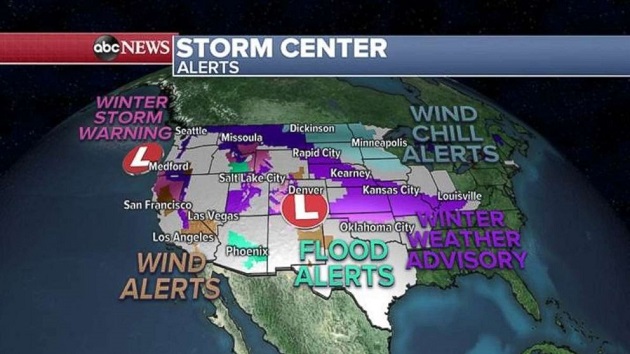 ABC News(NEW YORK) — A storm brought widespread heavy rain to California on Thursday and caused flash flooding, mudslides and the need for water rescues in many parts of the state.
Palm Springs, California, received 3.68 inches of rain on Thursday, which was its third-wettest day on record. In the higher elevations of Sonoma County and San Diego County, 10 to 12 inches of rain was reported. In the Sierra Nevada Mountains, nearly 2 feet of snow was reported.
The same storm is bringing heavy rain to parts of Arizona and New Mexico Friday morning, with localized flash flooding possible. Some of the energy from this storm will interact with colder air coming across the Plains, and set the stage for snow and rain to impact the central and eastern U.S. this weekend.
New winter weather advisories are being issued for parts of the Plains and Ohio River Valley, including Kansas City, Missouri, and Louisville, Kentucky. Additionally, colder air spilling in from Canada is causing wind chills to dip dangerously low in parts of the Upper Midwest. The Dakotas could see wind chill values as low as minus 40.
A new storm developing in the central U.S. will bring a quick hit of snow from the Northern Plains to Missouri on Friday. Snow will be especially heavy in the Kansas City area during the day. This storm will quickly exit out toward the Mid-Atlantic early Saturday morning.
A new storm will come in right behind it and bring another hit of snow to parts of the Midwest — from the Dakotas to Illinois — on Saturday night.
This storm will race off to the east on Sunday night and bring some snow along the Interstate 70 corridor from Indiana to Pittsburgh on Sunday, and bring wintry impacts to parts of the Northeast by early Monday morning.
The result of these storms will be a swath of 3 to 6 inches of snow from the Dakotas to Missouri this weekend, with a bull's-eye of 6 inches locally in the Kansas City area. To put some of this winter’s snow pattern in perspective, Kansas City already has had over 18 inches of snow, while Boston has had only 4.8 inches of snow.
Additionally, this pattern will bring a couple rounds of heavy rain to parts of the South, with 1 to 2 inches of rain possible in parts of Tennessee and Georgia. This will likely be the start of a particularly wet pattern for the southeast U.S. going into the next week.
Western U.S. stays unsettled
The heaviest of the precipitation on the West Coast has ended and it is becoming more scattered in nature. The main storm that brought the very heavy rain to California is moving through parts of Arizona and New Mexico Friday morning. There is still a chance for localized flash flooding in parts of Arizona through the morning hours, where locally over 2 inches of rain will fall.
Meanwhile, a separate storm lurking the Pacific Northwest will keep the region unsettled with rain and snow moving through this weekend. At this time, the direct impact from this storm does not appear to have the same type of severity as the storm that just hit California. However, the wet pattern will persist and locally heavy rainfall could still cause indirect impacts due to very saturated ground, such as mudslides and debris flows in recent burn areas.
Locally, 1 to 3 feet of snow is possible in the Sierra Nevada Mountains through the weekend. Along the coast there is the potential for half an inch of rain, which could cause localized flash flooding and debris flows.

Stormy weather pattern on the way for the West and the South
Spring-like weather across much of US, possible heavy snow in Rockies and parts of West
Spring-like weather from Denver to NYC as strong storm hits West with snow
Coast Guard: 10 rescued after becoming stranded on ice floes in Lake Erie
Heavy snow across Rockies and Cascades, seasonable air returns to the Gulf Coast
Family farm brings calves into the kitchen with South hit by record cold