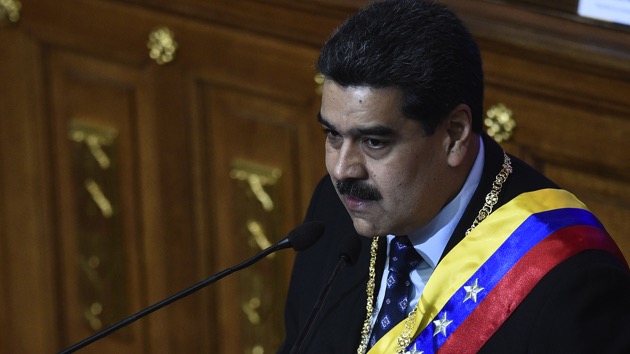 FEDERICO PARRA/AFP/Getty Images(WASHINGTON) — The U.S. Treasury is sanctioning five top Venezuelan officials as it seeks to tighten the hold on President Nicolas Maduro and his government and force the socialist leader to resign.
The latest financial penalty comes more than three weeks after the U.S. recognized opposition leader Juan Guaido as the interim president and declared Maduro's rule was no longer legitimate.
The State Department declined to comment, saying only that its officials "exchange opinions with a wide variety of foreign interlocutors, especially while we continue to take all steps to ensure the safety and security of our Embassy personnel on the ground in Caracas."
"Do not test the United States on our resolve to protect our own people," a department spokesperson added.
The U.S. sanctioned Maduro's intelligence chief and first commissioner, the head of the military's counter-intelligence agency, and the head of the national police's special forces. U.S.-based assets will be frozen, and American individuals or businesses are barred from working with them.
The head of Venezuela's state-owned oil company — Petroleos de Venezuela, S.A. or PdVSA — has also been sanctioned, according to the Treasury.
"Treasury continues to target officials who have helped the illegitimate Maduro regime repress the Venezuelan people," said Treasury Secretary Steven Mnuchin in a statement, saying they have "systematically violated human rights and suppressed democracy, including through torture and other brutal use of force… [and] facilitat[ed] Maduro's corruption and predation."
Venezuela has been in the throes of political chaos for weeks now, with mass protests against Maduro for what opponents say are his crackdown on political opposition, his consolidation of power and his mismanagement of the economy that's led to hyperinflation and food and medical shortages.
Guaido, the president of the democratically elected National Assembly, was sworn in as interim president by supporters on Jan. 23, using the country's constitution to declare Maduro illegitimate. The move was immediately recognized by the U.S. and now more than 50 countries.
Copyright © 2019, ABC Radio. All rights reserved.