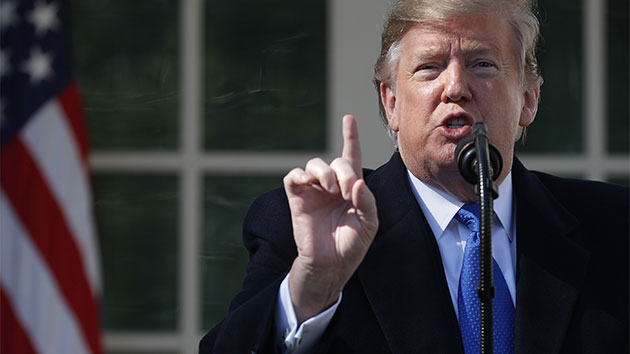 Chip Somodevilla/Getty Images(WASHINGTON) — President Donald Trump announced his decision Friday to declare a national emergency over what he called an "invasion" at the southern border. The declaration will allow his administration to use additional funding for a border wall, which Congress refused to fund in full in the bill passed Thursday to keep the government open.

Here are some of the statements the president made to justify going around Congress to fund the border wall to the tune of about $8 billion, a plan that is likely, by the president's own admission, to face immediate legal challenges.

Crisis at the border?

The numbers that come out of his own Department of Homeland Security, instead of supporting his claim of an "invasion," show that illegal border crossings are at historic lows.

According to Customs and Border Protection data, illegal migration is down dramatically over the last two decades.

Trump: “Take a look at our federal prison population, see how many of them, percentage-wise, are illegal aliens, just see. Go ahead and see.”

The president said this in response to a question about the disconnect between the president’s description of an “invasion” at the southern border and the numbers from his own administration.

In reality, undocumented immigrants are about half as likely to be incarcerated as native-born Americans, according to a report from the Cato Institute on nationwide prison incarceration rates.

Trump, however, specifically said to look at numbers in federal prisons — which is where someone is confined when they commit an immigration offense.

Also in the report: Approximately 90 percent of the country’s inmate population is in state prisons and local jails — not federal prisons.

How drugs get into the country along the southern border

The biggest fentanyl bust in history was made just a few weeks before the president made this claim. According to an announcement from the federal government, 254 pounds of the lethal drug heroin were seized by Customs and Border Protection. But the smugglers weren't trying to sneak across the border with the drugs in backpacks, or through an underground tunnel. The drugs were loaded into a trailer filled with cucumbers and shuttled to a U.S. port of entry in Nogales, Arizona.

According to the Drug Enforcement Administration's 2018 Drug Threat Assessment, the majority of drugs enter the U.S. through ports of entry at the southwest border.

“The majority of the flow is through POVs (privately owned vehicles) entering the United States at legal ports of entry, followed by tractor-trailers, where the heroin is co-mingled with legal goods,” according to the DEA assessment. Are there other ways of getting drugs in the country from Mexico? Yes. By water, and by air and through other borders, but those methods account for only a small percentage of the heroin seized by the U.S.

A "small percentage" of all heroin seized along the border was between ports of entry, according to the DEA assessment.

Boston residents asked to check vote status after man lights ballot box on fire
Sen. Kamala Harris calls Trump’s attacks ‘childish’ on ‘The View’
How Trump’s team spent most of the $1.6 billion it raised over 2 years
Clearfield Borough Police: fraudulent checks for $30,000, burnt pizza, parking space fight
‘He shot himself in the foot’: Seniors repelled by Trump’s pandemic response
Senior citizens, key to Trump’s 2016 victory, now far from a sure group for president