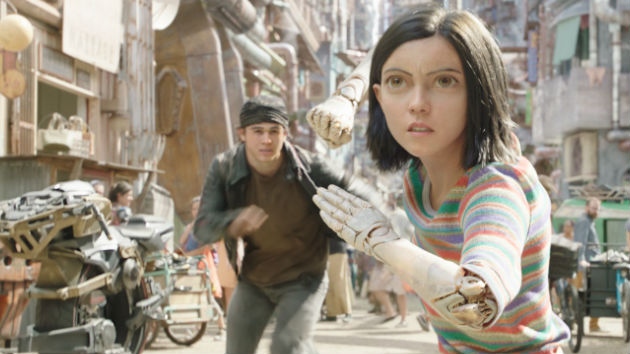 That is to say, even though the movie takes place in a post-apocalyptic locale called Iron City, and centers on a fully computer generated heroine, Rodriguez, along with producer James Cameron and his Oscar winning Lightstorm Entertainment partner Jon Landau, strove to keep the set as real as possible.

Rather than relying on greenscreen, as many sci-fi or fantasy movie-makers do, Rodriguez looked to his lower-budget expertise, and had his crew to build actual "practical" sets and props his actors could reach out and touch.

For Rosa Salazar, who realized her character of Alita thanks to cutting-edge performance capture technology like the kind that translated Andy Serkis' performance into Gollum in the Lord of the Rings movies, this on-set realism made all the difference.

"We actually did only one day of greenscreen work," she tells ABC Radio. "Every other day was done in the practical environment with practical people and practical props."

Landau tells ABC Radio, "Walking onto the streets of Iron City, where you feel it you feel the people and that energy. We wanted that to come across in the performances. And we also wanted to…allow Rosa to play scenes right there with Christoph Waltz, with Ed Skrein, with Mahershala Ali — [to] let technology be an enabler not something that prohibits."