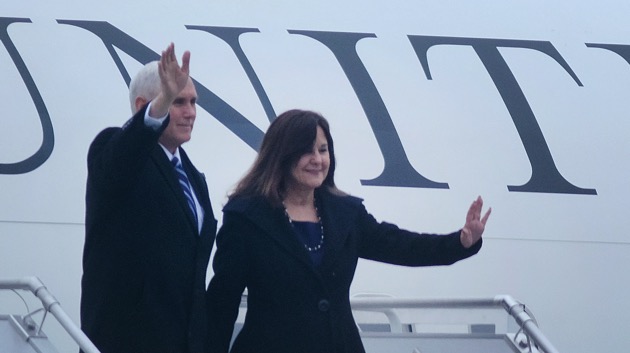 Sean Gallup/Getty Images(MUNICH) — Vice President Mike Pence is expected to address the rising tension in Venezuela during his trip to Germany as the Trump administration continues to take steps to resolve the ongoing tension in the region.
Pence, who held a roundtable discussion earlier this month with exiles from Venezuela in Florida has vowed to continue to apply pressure “until the suffering is over and freedom is restored.” On Friday, the U.S. Treasury announced it is sanctioning five top Venezuelan officials as it seeks to tighten the hold on President Nicolas Maduro and his government and force the socialist leader to resign.
The Trump administration has continued to challenge Maduro's claim to the presidency instead, Trump has recognized the opposition leader Juan Guaido as the country’s leader but the political standoff has continued to escalate.
Pence, who has called Maduro a "dictator”, is in attendance at the Munich Security Conference in Germany and is expected to once again call for peace and stability, according to a White House senior official.
“The struggle in Venezuela is between dictatorship and democracy, and freedom has the momentum. Nicolas Maduro is a dictator with no legitimate claim to power, and Nicolas Maduro must go,” Pence said in Florida earlier this month while speaking at a Venezuela solidarity event.
The vice president has focused heavily on resolving this issue and met with Carlos Vecchio, U.S. Ambassador of Venezuela, Julio Borges, Ambassador of Venezuela to the Lima Group, and other Venezuelan officials in January to express his support.
At the Munich Security Conference, Pence is expected to underscore the importance of nations recognizing the opposition leader as president in his address on Saturday. President Donald Trump's senior adviser and son-in-law Jared Kushner will also be traveling with Pence.
Pence will hold bilateral discussions with high level officials including the president of the Islamic Republic of Afghanistan and the president of Ukraine, aimed to the "highlight the Administration’s call for more equitable burden sharing within the NATO Alliance, stabilizing the Middle East and Latin America, and harnessing cooperation among partners to establish fair terms for international commerce," the White House said in a release.
Ahead of his visit to Munich, Pence stopped in Warsaw, Poland for a conference led by the United States and Poland focused on the Middle East.
While the vice president meets with European leaders in Poland, President Donald Trump met with Colombian President Ivan Duque Marquez on Thursday to discuss what they called “the democratic and humanitarian crisis in Venezuela.”
The United States and Colombia vowed to work together with Guaido to provide aid to Venezuela in need and to “restore, freedom, democracy, and prosperity,” according to White House statement.
When asked if the White House is considering military action in the country, Trump replied he is looking at “a number of different options.”
Trump is expected to travel to Florida on Monday to continue to express support for Venezuela.
Copyright © 2019, ABC Radio. All rights reserved.