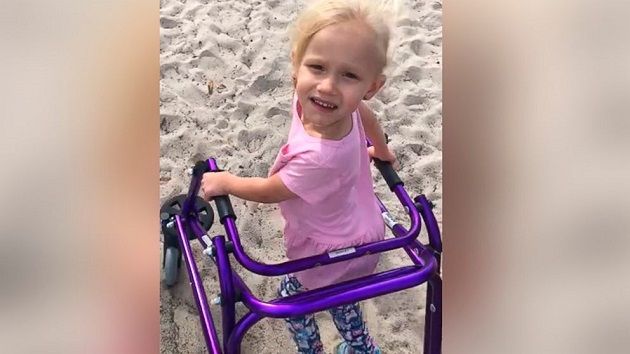 Courtesy Danielle Zukosi(NEW YORK) — A Florida mother is hoping a video showing her 5-year-old getting trapped in the sand will motivate her county to build more accessible playgrounds for kids with special needs.
Danielle Zukosi attended a birthday party at Anderson Snow Park in Hernando County, Florida, on Feb. 10. The mother of three was accompanied by all of her children. Her twins, Iris and Harmony, both adopted, have cerebral palsy. Harmony also has autism.
Iris also has a sub-condition called hemiparesis, which effects her muscle movements. As a result, she has to use a walker to get around, Zukosi told ABC News' Good Morning America.
At the party, Zukosi said she happened to be recording a video of the children for her husband, who was at work at the time. When the kids were approaching the swings, the video shows Iris stopping in her tracks. Zukosi said she stopped because her walker got trapped in the sand where the playground equipment was set.
Zukosi posted the footage on her Facebook page where it garnered over 3,000 views and was later picked up by her local news station.
"It was extremely sad," Zukosi said. "She is a very happy child. It got to me, but sometimes she will stop doing something and needs a little bit of encouragement. [I'll say], 'Let's give it a try,' before I make that jump and whisk her away. But once I had seen the look on her face, that's when I cut the video off."
Zukosi said she carried Iris to the swing and later emailed Hernando County's parks and recreation department to let them know that Anderson Snow Park is not fully accessible to all children.
Zukosi said a park employee referred her to another park that uses mulch at its playground area, but Iris still has trouble navigating her walker in this material. She scoots in the mulch to get around.
The employee was very responsive and told Zukosi that he'd look into the budget to replace the playground surfaces, Zukosi said.
"My ultimate goal is to have an accessible playground for all children to use," Zukosi explained. "Whether they're in a wheelchair or walker, there should be something for each child to do."
Zukosi even created a change.org petition to ask the county to make the park more accessible.
A representative from the Hernando County Government released the following statement to GMA regarding Zukosi's mission:
"All of our county parks with playground equipment, except Anderson Snow, have the certified playground mulch that meets ADA [Americans with Disabilities Act] requirements. Our Parks and Recreation Department has planned for it to be installed at Anderson Snow this year and has now moved it up on the priority list. We expect it to be in within a month or so."
Zukosi said she is meeting with Hernando County Parks and Recreation later this month to discuss an alternative to replacing sand with ADA mulch. The mulch will technically make the park compliant, but Zukosi said Iris cannot push her walker through it.
"I think it's great to spread awareness because because a lot of people don't understand our daily struggles," Zukosi said. "It's not just at the park where she should have freedom and independence."
She went on, "This isn't just about Iris. It's about other children too. [There's a reason] we don't go to the parks because we know what's there for us. There's nothing."