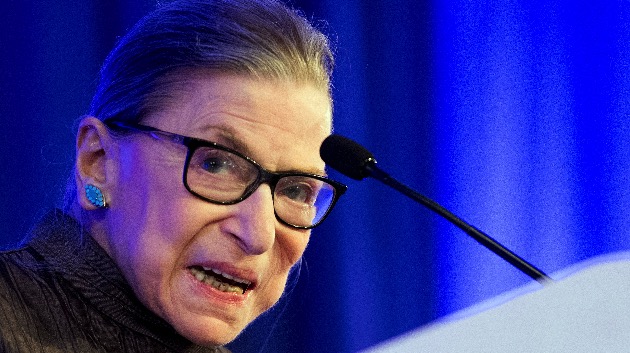 JIM WATSON/AFP/Getty Images(WASHINGTON) — Justice Ruth Bader Ginsburg returned to the Supreme Court Friday for the first time since undergoing cancer surgery in December, a court official tells ABC News.
The 85-year-old Ginsburg, who had two cancerous nodules removed from her left lung in an invasive pulmonary lobectomy, had been recovering from home and absent from court proceedings for the first time in her 25-year career on the bench.
Officials have said she has remained engaged in the casework.
Earlier this month, Ginsburg made her first public appearance in weeks but kept a low profile, attending a production of "Notorious RBG in Song" at the National Museum of Women in the Arts and sitting in the back of the auditorium. Her return to the bench is expected to be a relief to liberals and her legions of fans, who had feared her retirement or death would give President Donald Trump another opportunity to solidify the court's conservative majority in the highest court in the land.
It will also dispel rumors and conspiracies that have swirled in recent weeks — fanned by right-wing bloggers — that her demise is imminent. The court said last month that Ginsburg's doctors confirmed in an exam following the surgery that she had "no evidence of any remaining disease" and that no further treatments were planned.
The justices are meeting behind closed doors in conference Friday to discuss cases and vote on petitions for review. The court will reconvene for oral arguments on Tuesday. Ginsburg is expected to be back in her seat beside Chief Justice John Roberts, but court officials could not confirm her attendance. ABC News' Wil Cruz contributed to this report.
Copyright © 2019, ABC Radio. All rights reserved.

Supreme Court wrestles with voting rights and race discrimination
New mint M&M’s cookie ice cream sandwiches arrive in time for St. Patrick’s Day
Judge returns to bench after son’s murder: ‘I will not be frightened or be afraid to do what I love to do’
Baby born deaf reacts to hearing music for first time
FBI director testifies for first time since Capitol assault
Infuriated by Dems dropping minimum wage hike, progressives say ‘time for wealth tax’