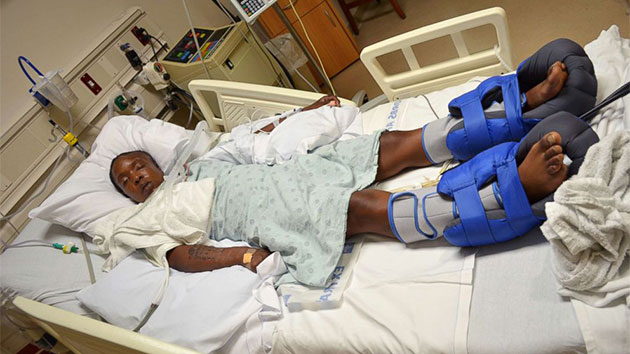 Family of Ashanti Jordan
Posted on February 15, 2019 by ABC News

Family of Ashanti Jordan(FORT LAUDERDALE, Fla.) — When Tracy Jordan sees people darting around Fort Lauderdale, Florida, on one of the thousands of motorized rental scooters available in the city, she says she sometimes has to cover her eyes as her heart sinks and her anger rises.

In December, Jordan's 28-year-old daughter, Ashanti, was riding a two-wheeled Lime e-scooter home when she was broadsided by a car at an intersection in west Fort Lauderdale. Her daughter, she said, has been fighting for her life and in a coma ever since.

"It's so traumatizing," Tracy Jordan said during a news conference this week. "Every time I see someone on a scooter, it's like, they don't understand the danger behind these scooters."

On Thursday, Jordan filed a lawsuit against Lime, blaming the scooter company for the crash that has, according to the court document, left her once vibrant daughter in a "persistent vegetative state."

The case is the latest in a string of serious injury accidents linked to e-scooters in cities across the country where the scooter craze has taken hold.

Dark side of scooter craze

Emergency rooms across the nation are being inundated with patients injured while riding the scooters, which have braking and accelerator systems and can go 15 to 35 mph.

In September, a 24-year-old man in Dallas was killed while riding a Lime scooter home from work, according to police. An autopsy ruled that Jacoby Stoneking's death was an accident caused when he fell off a Lime scooter and hit his head. He was not wearing a helmet at the time and the scooter he was riding was found broken in half, police said.

Also in September, a 20-year-old man riding a Lime scooter was killed when he was struck by an SUV and dragged 20 feet in Washington D.C.'s Dupont Circle, according to police.

Ashanti Jordan, who was not wearing a helmet, suffered a devastating brain injury around 2:15 p.m. on Dec. 28 while riding a Lime scooter home from her job as a security guard at Broward General Medical Center in Fort Lauderdale, where she is now a patient in the intensive care unit.

Todd Falzone, the Jordan family lawyer, blamed Lime's operating instructions for Ashanti Jordan being hit by a car while riding the scooter on the street, as instructed by the Lime smartphone app and by stickers on the scooter she was operating.

In November, the city of Fort Lauderdale passed an ordinance prohibiting riders from operating the dockless rental scooters on the street and requiring that they be used on the sidewalk.

"Between Dec. 1 and Jan. 31, there have been 40 incidents involving scooters" in Fort Lauderdale alone, ABC affiliate WPLG-TV in Miami reported, citing Fort Lauderdale Fire Rescue. "A total of 31 of them required someone [to] be transported to the hospital, and four of those were level-1 traumas."

Since Fort Lauderdale allowed e-scooter rentals into the city on Nov. 1, there have been more than 320,000 rides through January, adding up to more than 460,000 miles traveled, according to the city.

Falzone said a big part of the dangers the scooters impose in Fort Lauderdale stems from the instructions given by Lime on where to operate them.

"Well, Lime's app as of that time and really as of today, tells you the opposite" of the new Fort Lauderdale ordinance, Falzone said. "It tells you literally do not operate this on the sidewalk. Not only does the app tell you that three times, but the scooter itself has a sticker on it that says, 'Do not operate on the sidewalk.'

"So you have a scooter company that's supposed to be knowledgeable on the law … instructing the user to violate the law without telling them they are violating the law," Falzone told ABC News. "They are operating in violation of the law down here and that's got to stop."

He said Ashanti Jordan was injured for obeying Lime's instructions.

"She had left work a few minutes before and she was only about a mile-and-a-half from where she works … on a side street in sort of a mixed residential business neighborhood and she got T-boned by this car," Falzone said.

The accident has left Jordan with "catastrophic and permanent injuries, including a severe brain injury which led to a coma and has left her in a persistent vegetative state," according to the lawsuit the Jordan family filed in Broward County Circuit Court.

In a statement to ABC News, Lime officials said, "The safety of our riders and the community is our highest priority, and we're committed to making our streets safer by working with local governments to support safe infrastructure for scooters and bikes. Our thoughts remain with Ms. Jordan and her family."

Lime did not comment on its operations in Fort Lauderdale.

The company — like its competitors Bird, Jump and Lyft — has expanded rapidly in the last couple of years. It now operates in over 100 cities around the world.

Meanwhile, Tracy Jordan said she is praying for her daughter, who has undergone brain surgery and had part of her skull removed to relieve swelling on her brain, to survive. She also hopes her lawsuit prompts Lime to take steps to prevent others from ending up like her daughter.

"I just want everybody in the community to understand this is dangerous and this is wrong," Tracy Jordan said. "These things can ultimately end your life."