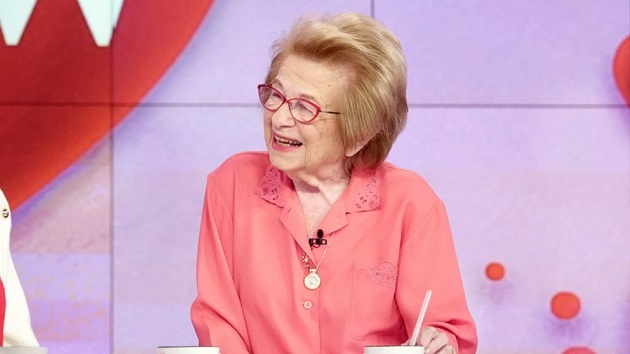 Nicolette Cain/ABC(NEW YORK) — Sex therapist Dr. Ruth said she is concerned about millennials’ issues with intimacy and loneliness.
Ruth Westheimer, better known as legendary sex therapist Dr. Ruth, voiced her concerns about the younger generation’s issues with intimacy on Valentine’s Day at The View.
Ruth said she is well aware that millennials might not know who she is, but she knows them, and they’re the reason why she updated her book Sex for Dummies for the 21 century.
In a digitally-driven world, Ruth makes it clear that she understands the level of access people have to address their sexual concerns, so this book isn’t filled with instructions on the birds and the bees. Publishers approached Dr. Ruth because they thought the younger generation needed to hear from her.
“They’ve heard people like me. I’m not the only one,” she said about people in her field giving advice.
“I can talk about orgasm, I can talk about erection — I’m a sex therapist,” Ruth continued.

She grabbed the hand of co-host Abby Huntsman, who’s pregnant with twins, and assured her that she can help her discover what kind of sex is best when you’re very pregnant.
Ruth said that she's concerned that a lack of intimacy among millennials is a worrying development in the age of social media.
“I’m very concerned about loneliness in the millennials,” Ruth said. “And I’m very concerned about the art of conversation … getting lost.”
Ruth said she hopes to help guide younger generations by specifically addressing these issues in her book.
The world-renowned psycho-sexual therapist doesn’t have a PhD, or even a high school degree. She’s a German-born Jewish refugee who refers to herself as a Holocaust orphan. Her parents sent her to Switzerland before World War II.
When the war ended, she learned that both of her parents had died in the Holocaust. Making the best of her situation, Ruth sneaked away with books provided by her first boyfriend, to learn on her own.
Ruth, now 90, holds multiple honorary doctorates and helps people learn how to be happy with their intimate relationships.

Black health care workers shine spotlight on issues of diversity in medical field
And Just Like That… Chris Noth hints Mr. Big could be heading to the ‘Sex and the City’ reboot
‘And Just Like That…’ Mr. Big will not appear in ‘Sex and the City’ reboot
ICE issues new interim enforcement guidelines on arrests, deportations
Houston issues boil water advisory amid winter storm: How to keep your water safe
Olivia Munn issues powerful statement rallying against “Asian Hate”