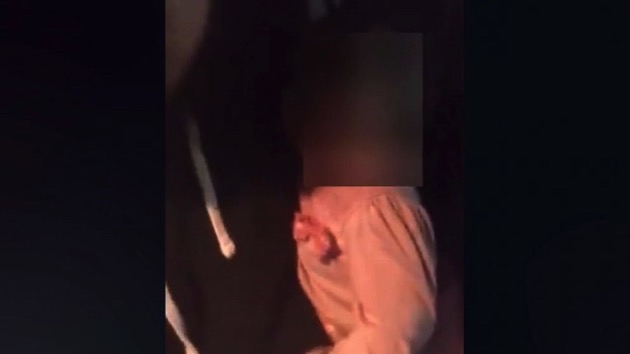 Santa Rosa Police/Facebook(SANTA ROSA, Calif.) — Del Hedrick was driving for Lyft and had just dropped off a passenger at an apartment complex when something startled him.
"I see a baby, right in front of the car!" he said, according to ABC affiliate KGO. "Rain is pouring, it's 40 degrees outside and I froze. It was scary. It was a really scary moment."
The father of two jumped into action, scooping up the toddler from the Santa Rosa, Calif., apartment complex parking lot around 10:30 p.m. on Tuesday night.
"She was barefoot, soaking wet, onesie soaking, wet hair, full diaper — yeah, it was heartbreaking," he said.
Hedrick knocked on some nearby doors to try and find the toddler's caretakers. But when nobody recognized her, he took the toddler into his car and turned on the heat, trying "to warm her up and calm her down," he said.

A video shot by Hedrick and posted by the Santa Rosa Police shows Hedrick in his car with the toddler, explaining what had happened.
"Cops are on their way," he said in the video.
Santa Rosa Police arrived soon after and were able to locate the toddler's family and reunite her with them, the department said in a Facebook post.
The case does not involve neglect or abuse, police told KGO, and the toddler likely walked out an unlocked door. ABC News has reached out to Santa Rosa Police for more information.
In the Facebook post, Santa Rosa Police praised Hedrick as a "community hero," saying his "actions demonstrate how we all work together to keep our community safe."
While the toddler is now safe at home, Hedrick was shaken by the incident, according to KGO, and hugged his own kids tight when he got home that night.