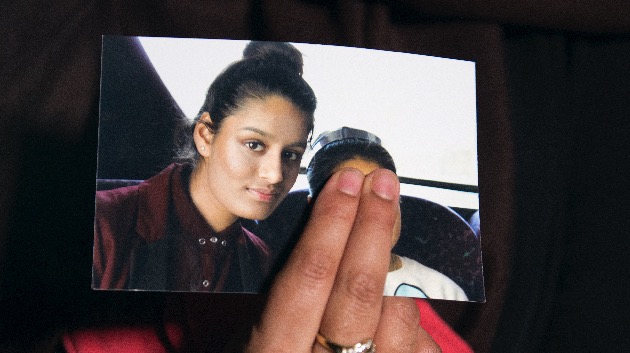 Laura Lean – WPA Pool/Getty Images(LONDON) — When three teenagers missing from East London were found to have left to join ISIS in Syria in February 2015, security camera images from London's Gatwick Airport were a stark emblem of ISIS' potential to influence young people abroad.
That three girls living in London would overlook the high-profile atrocities committed by ISIS to travel to Syria at the height of a civil war to join a terrorist organization captured many's attention.
Four years later, The Times' veteran war correspondent Anthony Loyd tracked down one of those young women, Shamima Begum, now 19 and nine months pregnant with her third child, at a refugee camp in northern Syria.
In a Times article published Wednesday, Loyd reported Begum abandoned the last ISIS stronghold in eastern Syria as coalition forces step up a final effort to wipe out the group.
Loyd described the teenager as "calm" in a BBC interview, adding that he found her adamant on her reasons for joining ISIS in 2015 — she had no regrets.
But now, she is appealing to the British government to get her safely home, especially to care for her baby when she gives birth. "In the end, I just could not endure anymore. I just couldn’t take it. Now all I want to do is come home to Britain," she told Loyd.
Speaking on Sky News on Thursday, U.K. Security Minister Ben Wallace said, "Actions have consequences." He added that when the girls left to join ISIS, there was "no shortage" of media coverage about what the terrorist group was doing.
Wallace declined to say what would happen in Begum's case, but said, "We are obliged to ensure that our citizens have rights no matter who they are, and if they come back here they should expect to be investigated and interviewed for joining ISIS, and if possible we will try to prosecute them."
While there have been several prosecutions of foreign fighters in the U.K. in recent years, civilian members of ISIS such as Begum are treated differently under the law, and Begum could face charges around supporting the terrorist network — but courts may find it hard to prosecute her.
Shiraz Maher, director of King's College London's International Centre for the Study of Radicalisation, outlined issues courts could face in a series of tweets.
"There are real problems with admissibility of battlefield evidence in British (and other Western) courts. That could make it difficult to secure prosecutions. The restrictions on evidence in those cases are in place for good reason, so the government won’t waive it," he wrote.
However, the British government has been working on legislation to convict foreign fighters and supporters returning home, including a new law that would help charge people who traveled to proscribed areas, such as ISIS strongholds in Syria and Iraq. It may be possible to prosecute returning "jihadi brides" on these offenses.
Begum told The Times when she arrived in ISIS territory in 2015, she applied to marry an English speaker between the age of 20 to 25 and was assigned to a Dutch jihadist.
She described life in Raqqa as "normal" and "the one I wanted." She also told Loyd about the first time she saw a decapitated head in a bin in the city, saying it "didn’t faze me at all."
Begum was living with her husband in Raqqa, the de-facto capital of ISIS in Syria, but the group was pushed out by coalition forces led by the US-backed Kurdish majority Syrian Democratic Forces (SDF). ISIS now has a final presence in areas around the Euphrates River close to the Iraq border and the town of Baghuz.
Begum told The Times she fled the area a fortnight ago, leaving her husband, whose fate she does not know.
She also said one of her school friends, Amira Abase, who traveled to Syria with her, remained with the terrorists making their last stand. Kadiza Sultana, the 16-year-old of the trio, is reported to have been killed in an airstrike two years ago.
In 2015, the three girls joined another teenager, Sharmeena Begum, also from Bethnal Green in East London, who had traveled to Syria earlier and helped organize their journey.
"I heard from other women only two weeks ago that the two were still alive in Baghuz. But with all the bombing, I am not sure whether they survived," she told Loyd.
Begum and her husband had two children who died of illness and malnutrition. She is now expected to deliver her third child soon and wants to raise the child in the U.K., under its health care system.
However, she is aware that she may return to a hostile nation should she be allowed to come back to the U.K.
"I know what everyone at home thinks of me as I have read all that was written about me online. But I just want to come home to have my child. I’ll do anything required just to be able to come home and live quietly with my child," she said.
Copyright © 2019, ABC Radio. All rights reserved.