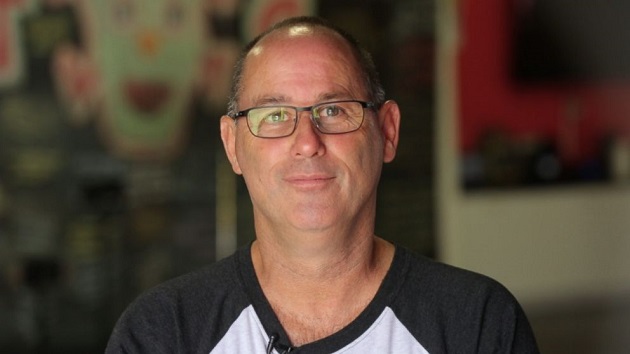 Fred Guttenberg, the father of 14-year-old Jaime Guttenberg. (ABC News)(PARKLAND, Fla.) — The dreams Fred Guttenberg had — to watch his 14-year-old daughter realize her dreams — were ripped from his hands one year ago on Valentine’s Day.

That was when a former student at Marjory Stoneman Douglas High School in Parkland, Florida, walked into the school with an AR-15-style semi-automatic rifle and killed 14 students and three school staff members.

Fred Guttenberg’s daughter, Jaime, a freshman, was among those murdered that day. Barely 24 hours after her death, her father took the podium at a vigil — his first steps in making a change to honor his child.
“I just went up and I just started letting it loose,” he told ABC News' Nightline. “I remember saying that night, ‘This time they messed with the wrong community and the wrong dad. This dad is not going away.’”

Guttenberg became one of the many Parkland parents and students who turned their grief into a drumbeat for change, aiming to never let another family go through the horror they experienced and perhaps forever changing the debate over gun violence.
Like so many others, Stoneman Douglas senior Jaclyn Corin remembers the vigil the day after the shooting — the same one where Guttenberg spoke.

“This field here was filled with like 10,000-plus people,” Corin said. “There were 17 angels displayed, just an incredible amount of flowers everywhere.”
“There were little spots propped up with things for each person who had passed away,” said Ryan Deitsch, who was a senior at Stoneman Douglas when the shooting occurred. “I'd spend maybe 2 to 4 hours here, no matter what time of night it was.”
It was at this vigil that the tragedy pushed Corin to action. She walked up to a congresswoman that night with a plea.

“I was like ‘Hi I'm Jackie, I'm a junior at Douglas, I want to make policy change somehow, I don't know anything about politics. But I want to do something,’” Corin remembered. “So she connected me to a Florida state senator, which is what led me to doing the trip to Tallahassee with the 100 other kids.”
Days after the shooting, Corin led a group of Parkland students to the Florida state capital. The young activists organized a movement called “Never Again” demanding more than just thoughts and prayers from state legislators.

Within a month, there was action in Florida and a partial win for gun control advocates. Gov. Rick Scott signed a law that increased both fundings for school security and raised the legal age to buy an assault weapon to 21.

“Florida is a state that is a NRA stronghold, yet very rapidly, they took action,” said professor Daniel Webster of the Center for Gun Policy and Research at Johns Hopkins University. “I’ve been studying gun violence and our response to that for about 30 years, and I’ve never seen such swift and dramatic action.”

But the students weren’t satisfied. On March 24, a mere six weeks after the shooting, they led a rally in the nation’s capital where hundreds of thousands amassed at what is said to be the largest protest against gun violence in U.S. history, called March for Our Lives.
An all-encompassing chorus spoke out with the Parkland students on stage, from an elementary school student from Virginia named Naomi Wadler to a high schooler from South Los Angeles named Edna Chavez.

“They made this an inclusive movement that’s not about schools,” Webster said. “A movement to reduce gun violence broadly and in communities most impacted by the problem.”

He said “maybe the most important thing” to come from the tragedy in Parkland is “an expansion of youth activism and involvement in the political process.”

Now, a year after the shooting, the students behind March for Our Lives are holding steadfast to their mission for common sense gun reform. The young activists gave Nightline an inside look at their headquarters — a tiny office that spawned a nationwide movement.

Deitsch said one of the photos displayed from the March For Our Lives “definitely shows us how far we’ve come from that moment.”

“It’s also really heartwarming, it’s like where we started and the fact that we are here talking to you almost a year later, and we are still going and growing — it means the world,” Corin said.

But this week in Parkland, that progress is overshadowed by a painful anniversary.

“It has felt like the longest year of my life. But at the same time it's felt like it's gone by in a flash,” Lauren Hogg, now a sophomore at Stoneman Douglas, said.

For students like her, Feb. 14 is a stark reminder of the friends she lost and the innocence that was robbed.
“It's hard to think that here I am and it's a year later. I'm now a sophomore. I turned 15. But my friends never got to,” Hogg said. “Especially because it's Valentine's Day … we see Happy Valentine's Day letters or we see even bouquets of flowers for me, I have flashbacks to kids running down the halls screaming holding onto their bouquets of flowers last year with gunshots.”

Guttenberg plans to spend Valentine’s Day remembering his daughter Jaime in Parkland — and says he will continue honoring her by pursuing gun control.
“We are not going away. Too many people are dying. This year was 40,000, more than traffic accidents. Any legislator that thinks they shouldn’t take some sort of action to reduce that number, you should prepare to be fired, because you’re weak,” Guttenberg said.

“I’m certain that she’s on my shoulder now telling me, ‘You can’t put up with this. You need to be strong,’” he said.

Victoria’s Secret plans to close up to 50 more stores this year
After a dark and deadly year, COVID-19 vaccines bring renewal, hope to hard-hit nursing homes
Michael B. Jordan admits Chadwick Boseman’s death is what “made me cry the most this year”
MIT graduate allegedly stole car on day of Yale student’s murder
Jameela Jamil says she grappled with suicidal thoughts last year
A year after his death, Ahmaud Arbery’s mother plans to celebrate his life