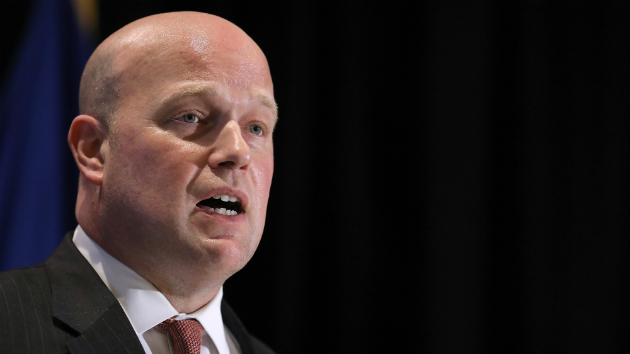 Chip Somodevilla/Getty Images(WASHINGTON) — The top Democrat on the House Judiciary Committee sent a letter to acting Attorney General Matthew Whitaker Wednesday saying his testimony last week to the panel was "incomplete" and "contradicted by other evidence."

Rep. Jerry Nadler, D-N.Y., who presided over the contentious oversight hearing with the acting attorney general, said Democrats believe Whitaker may have misled the committee under oath about his communications with the White House.
"Although the committee appreciates your decision to appear, Members on both sides of the aisle found many of your answers to be unsatisfactory, incomplete, or contradicted by other evidence," Nadler wrote. "You repeatedly refused to offer clear responses regarding your communications with the White House, and you were inconsistent in your application of the Department's policy related to the discussion of ongoing investigations."
The Department of Justice declined to comment.
In one example highlighted in the letter, Nadler pointed to Whitaker's denial of reports that Trump lashed out at him after Michael Cohen, the president's former personal lawyer, pleaded guilty to lying to Congress.

When asked during the hearing by Rep. David Cicilline, D-R.I., Whitaker denied the president responded in that way, saying: "No, he did not." Whitaker later refused to answer questions from Rep. Val Demings, D-Fla., about any private conversations with Trump about the Cohen case.

In his letter, Nadler said the committee "has identified several individuals with direct knowledge of the phone calls you denied receiving from the White House."

Trump denied lashing out at Whitaker in a tweet following the initial CNN report about their exchanges in December.
"The president and his lawyers are upset about the professional prosecutors in the Southern District of New York going after a non-crime and the innuendo the president was involved," Trump lawyer Rudy Giuliani told CNN at the time.
Democrats also raised questions about Whitaker's testimony when pressed on discussing special counsel Robert Mueller's investigation into Russian meddling in the 2016 presidential election with the White House.
Whitaker told the committee he did not discuss the Mueller probe with the president or White House officials since being briefed on the investigation. He told Rep. Zoe Lofgren, D-Calif., that he had not spoken to Trump or White House officials about the Mueller probe before he joined the Justice Department.
But he also admitted — "somewhat incredulously," according to Nadler — to interviewing with White House counsel Don McGahn about serving as a White House lawyer detailed to the Mueller investigation, a role later filled by Ty Cobb.
"I believe we can reach a reasonable accommodation with the Department about your responses to these questions. Failing that, we would expect to pursue a date and time for a formal deposition," Nadler wrote.
He is also seeking answers to questions from the hearing about Whitaker's conversations with the president, which Whitaker declined to share in the open hearing last week.
Whitaker has previously told lawmakers he had not "interfered in any way" with the Mueller investigation, which he has overseen since replacing former Attorney General Jeff Sessions after he was fired by President Donald Trump in November.

Nadler has not ruled out issuing a subpoena for Whitaker's testimony or closed-door deposition, even after he is replaced by attorney general nominee Bill Barr, who the Senate is expected to confirm later this week.
Copyright © 2019, ABC Radio. All rights reserved.