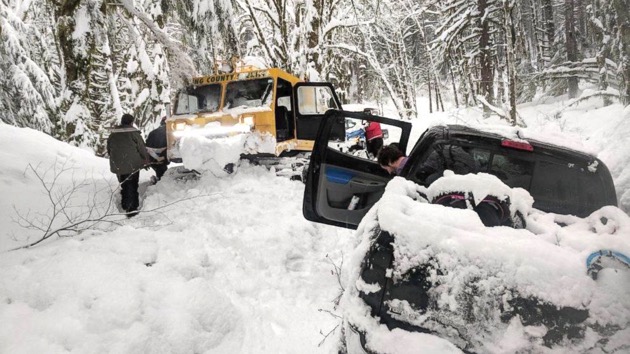 King County Sheriff's Office(KINGS COUNTY, Wash.) — On Tuesday, a family of five, including a 3-year-old child, were rescued after being stuck in the snow for 28 hours after a hike in the frigid Washington winter.
Peter Browne and his family parked their truck at Dingford Creek Trailhead on Monday and hiked six miles to the Goldmyer Hot Springs area, according to a Facebook post by the King County Sheriff’s office, who helped conduct the rescue.
On Tuesday, King County Sheriff’s department received a 911 call from concerned family members saying that Browne and the others had not returned as planned. Sheriff’s department officials also said that there was “significant snowfall overnight which would have made driving out of that area in a vehicle nearly impossible.
The family spent more than 12 hours hiking in the snow — starting around noon on Monday and not returning to their truck until 12:30 a.m. Tuesday morning due to the deeping snow, Browne told with ABC Affiliate KOMO.
The hiking party included Browne, his wife, their 3-year-old niece Aryanna, Browne’s brother and his brother's longtime girlfriend.
“The anxiety the whole time was just like, 'is Aryanna going to be able to stay alive?'” Browne told KOMO.
He said he carried the child in his snowsuit to keep her warm.
“I could feel her heartbeat, she could feel mine, we’re very close, and it was – failure was not an option.”
After reaching their truck the family attempted to drive home but encountered a downed tree which they were able to cut up with a chainsaw and bypass before their truck eventually got stuck in a ditch.
“Our options were to get rescued," Browne said. "And however that was going to happen, it was going to have to happen."
At around 4:15 p.m. on Tuesday, the King County Sheriff’s department and a county search and rescue team used a vehicle designed to travel through heavy snow called a Snowcat to reach and rescue the family.
Browne told KOMO that the family was in good spirits throughout the experience, and had plenty of food and multiple days of gas. But he said he regrets hiking with his niece in such poor weather conditions.
“Even if you’re capable, there are certain risks that are not worth taking,”
Copyright © 2019, ABC Radio. All rights reserved.

Active storm pattern with cross country storms bringing heavy snow, damaging winds, flooding rain
Massachusetts residents told they could wait hours or days to schedule COVID-19 vaccine appointment
Vivek Murthy to talk about his own family lost to the pandemic in nomination hearing
Clearfield Police: cars stuck because of snow, arguments, impaired people
Spring-like weather across much of US, possible heavy snow in Rockies and parts of West
Woman trapped for 10 hours under collapsed backyard awning in frigid weather lucky to be alive