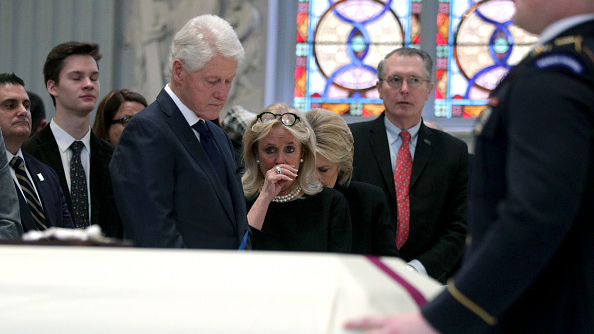 Alex Wong/Getty Images(WASHINGTON) — Former President Bill Clinton was 13 years old, he said, when a young congressman named John Dingell first became his idol.
Dingell, Democrat of Michigan and the longest-serving member of Congress who died last week at 92, took office when he was just 29, in 1955 — and on the day Clinton took notice of him, he was taking a stand against another member of Congress who opposed integrating schools in the South.
"For the younger people here who may think of John Dingell as yesterday's man — he was not afraid, as a young man, to risk the ire of people who might wreck his effectiveness," Clinton said during his eulogy for Dingell on Thursday at Holy Trinity Catholic Church in the Georgetown section of Washington, where members of official Washington had gathered to celebrate his life.
Dingell was an "old-fashioned man who did things in an old-fashioned way that we should adapt for new times," Clinton said of his longtime friend.
Clinton, as the nation's 42nd president, would come to know Dingell in the halls of Congress, and recalled memories from throughout their political careers, including campaigning for Dingell "in one of the rare examples when it looked like he might get less than 100 percent of the vote."
Dingell had a reputation for holding his ground, Clinton said to the congregation filled with Washington power players, including Dingell's wife, Rep. Debbie Dingell, who sat next to Clinton's wife, former Secretary of State and presidential candidate Hillary Clinton.
"Let’s be honest, this is the only time in our entire lives in public service where we were in the same room with John Dingell and got the last word," Clinton said to loud laughter as he began his remembrance.
In the last years of his life, Dingell became famous for his sparky commentary on Twitter. Clinton urged those listening to take note of Dingell's words and read through some of his "Greatest Twitter hits," which he called "Zen mastery."
"Few words, great wisdom. If you don't pay attention you'll miss it," he said.