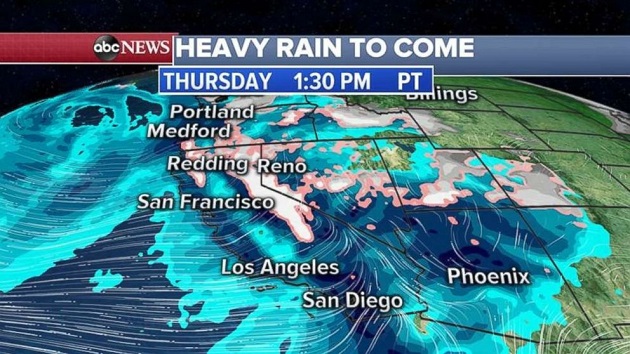 ABC News(NEW YORK) — The West Coast is feeling the effects of an atmospheric river, dumping record rain and snow from San Diego to San Francisco and Seattle.
The top rainfall on Wednesday was 9.04 inches in Venado, California, north of Santa Rosa, while San Francisco set a daily record with 2.5 inches.
Redding, California, received the most snow in the city in 31 years — 10 to 14 inches. The Snoqualmie Pass, east of Seattle, received 27 inches of snow.
A huge plume of moisture aimed at California, called an atmospheric river, will continue to bring heavy rain and snow to Southern California on Thursday.
Heavy snow is expected in the mountains, while flash flooding is possible Thursday morning and afternoon from San Diego to Los Angeles.
The tropical moisture will spill into Arizona, where flash flooding is possible just north of Phoenix and into Tucson, by Thursday afternoon.
Heavy rain will fall in Las Vegas as well, but significant flooding is unlikely. Heavy snow will fall in the Rockies and the Sierra Nevada Mountains.
Meanwhile, a new storm system will move into the Pacific Northwest and bring more rain and snow to the area.
By Friday, the atmospheric river will take a break and a new storm system from the north will bring more rain and snow for California and most of the West Coast.
The unsettled weather will continue into the weekend for the West Coast and into the Rockies. Along the coast, an additional 4 inches of rain is possible locally, with several feet of snow falling from the Sierra Nevada Mountains into the Rockies.